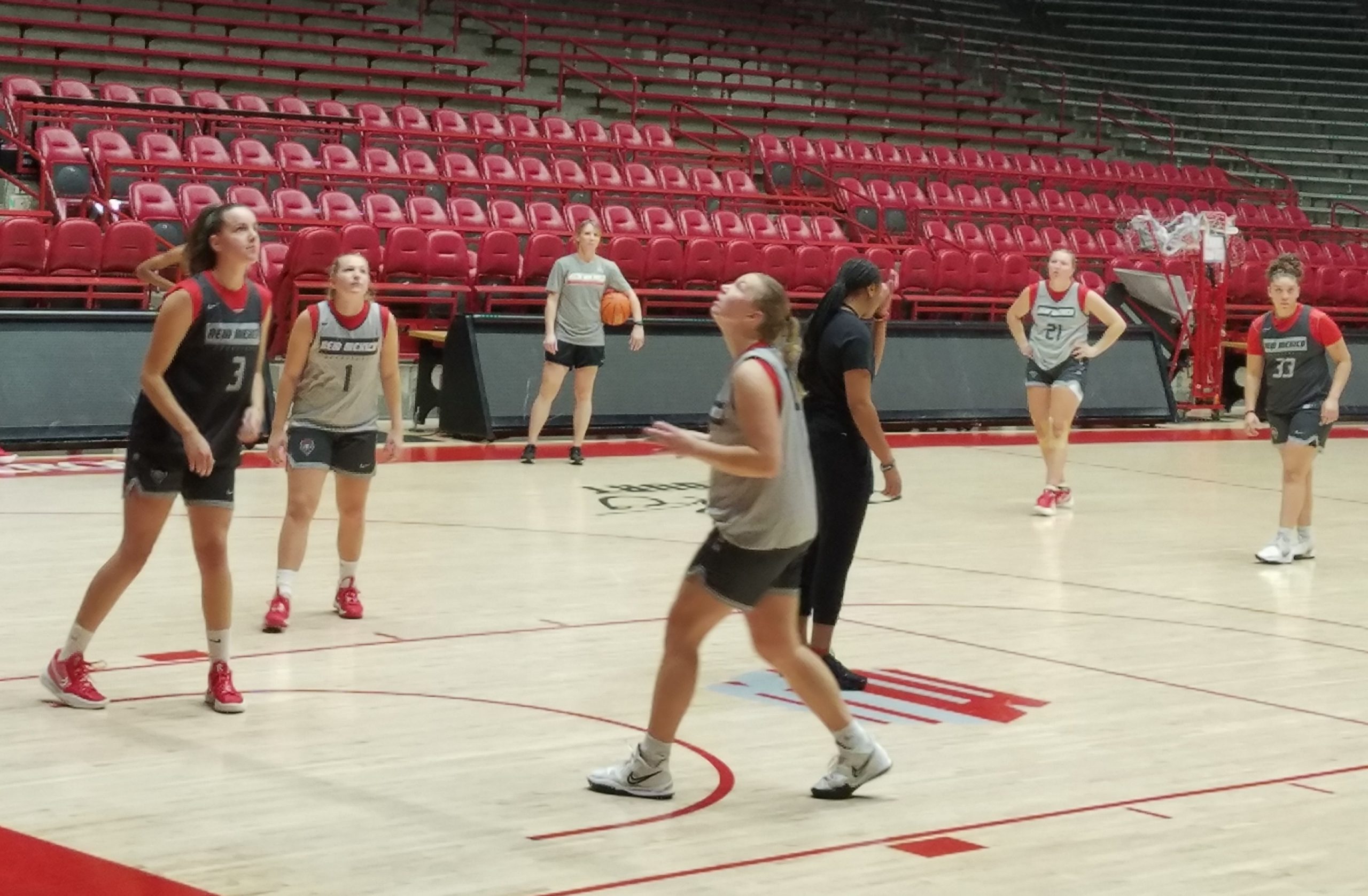 Joe:  I normally think of people from Southern California as playing volleyball or swimming.  What interested you in playing basketball? 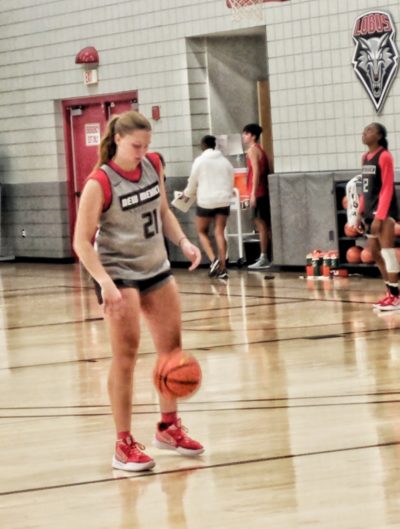 Mackenzie:  I have three older siblings who played basketball.  My father coached every single one of us–it was a family thing. The oldest is a girl and the two in the middle are boys.  I grew up in the gym just watching them play and being at every practice.  Sleeping until the horn goes off.  I’ve just been around it and grew up with it.  All my other siblings wound up picking a different sport whether that was football or volleyball or lacrosse.  I just stuck with basketball. That was just my passion. I’ve tried other sports, but basketball is the one I just stuck with.

Joe:  It’s a little easier on the body than lacrosse.

Joe:  There a lot of schools in Southern California.  Why did you come out here?

Mackenzie:  I actually didn’t want to stay home.  People think I’m crazy when I say that. I didn’t want to stay in San Diego, but I had experienced enough of it.  It was the same day every day.  I wanted to experience something new, whether that be seasons or whatever else.  New Mexico offered that, and the style of play fit me also.  It was a perfect fit.

Joe:  From the little I was able to see of the scores for high school play, you did not play at as fast a pace.  Tell us a little about your HS basketball career.

Mackenzie:  My freshman year we were a Division 3, middle of the road team.  We weren’t very good when I got there.  My sophomore year we moved up to D2.  By my junior and senior years we were in D1.  In my career we never had a chance of winning a championship, but we were always competing at that next highest level.  So we were always growing, and we were always young.  I never had a senior on those teams–Jaeden and AT are the first seniors I’ve ever had in my career.  It’s different watching them as being someone above me.  It’s a new experience.

Joe:  I imagine that the demographics of this team—you have no middle.  Five seniors, a bunch of freshman, and a couple of sophomores who went through a difficult year.

Mackenzie:  The crazy thing is that that was an exact replica of my high school senior year.

Joe: Except in high school, you were the senior.

Mackenzie:  Yes, I was the senior.  It’s interesting, someone asked me the other day what it’s like being on the team.  It’s interesting because you have girls who are 18 and you have girls who are 23 about to go into the real world.  But you couldn’t tell by the way we interact with each other.  There’s no level boundary between us.  We have each other’s back and we help each other out.  If something goes wrong or you do something wrong, we’ll point it out and help you fix it regardless of who you are.  Regardless if it’s a senior to a freshman, or a freshman to a senior.  I think that’s really cool because a lot of places, if you have a senior, they are at this level where they can’t be touched.  That’s not what you have here.  Jaeden and AT have done a great job of involving all of us in play, practices, decision making both outside and inside of practices.  They have made a really good job of making the team cohesive.

Joe:  It’s interesting your mentioning that.  Even at the same school, even with many of the same players from one season to the next, every team has a different personality.  This team appears to be as you described.  Obviously I know who the seniors are but, from watching them out there at practice it can be hard to tell that.  Other years there was very much a stratified system.

Mackenzie:  The cool thing here is that Anaya and I pride ourselves in bringing that energy, that sparkplug.  And the cool thing about this team is we obviously have our five starters who were starting last year and came back.  But, everyone else whatever we have to do for the team to win, that’s what we’ll do.  If that means you don’t play and you’re the best cheerleader on the bench, then that’s what you are.  I think that’s what makes this team special–we’re giving up ourselves for something bigger that’s brought us closer.  I was on the phone with my brother the other day and he was telling me that from the beginning of the season to now, we looked closer as a team.  I couldn’t agree more with him.  I feel we are finally honed-in on who we are as a team, what we need to do, and what our place is on the team and that’s what is getting us through this run in conference and what’s going to continue to push us forward to our goals.

Joe:  From high school to college, what has been the hardest adjustment for you?

Mackenzie:  This is a personal one, it’s sticking to myself. Like you said, there are a lot of changes and it’s really easy to be swept up and become someone completely different. It’s important to latch on to people who help you remember who you are and how you got here.  I think that’s been the biggest thing for me. Having the coaching staff that we do.  You can go to them, and they will help you. “Hey Ken, this isn’t you.” “Oh, thank you Coach, I needed that.” Having teammates that do the same thing.  Definitely, the biggest challenge is sticking with who you are and trying to stay within yourself at all times.

Mackenzie: I’m someone who likes to stay positive at all times.  I’m just going to do the work–whatever it is you need me to do, I’m going to do it.  I pride myself on not caring about the stats and unimportant things.  Did you work hard?  Did you do the important things?  Did you do the correct play?  Was your footwork correct?  Did you cheer your teammates on?  Were you the best teammate today?  Those to me means more than a lot of other things.  When you are at this big a level it’s hard to hone-in on those little things because everyone wants to focus on the stats, the name NIL, and all that kind of stuff.  It’s important to focus on the game and the little things.

Joe:  Watching you from when you first got here in the summer to now, there are some noticeable changes.  For example, you look more aware of where you need to be on defense.  How would you say you have grown and where do you think you still need to improve?

Mackenzie: So, I can tell you, hands down, since I’ve began playing basketball in high school, the hardest thing for me is just being in shape, being able to just run, have a motor.  I will do my best to try to keep going.  That’s something I’ve been really working on especially since the summer.  College is already a faster pace of a game, and the way we play makes it even faster.  It’s like skipping three levels from where I was at in high school.  Just being in shape is probably the biggest thing I always will be working on.  My offensive game will come and everyone here on the team has a great offensive game–that’s why they are here.  If they couldn’t shoot, they wouldn’t be here.  So, for me I realize that shooting in the gym is important but at the end of the day what’s going to get me on the court is how I play defense.  My high school coach, who was my dad said he’s never been prouder of my defense.  I can tell you in high school, I did not play defense.  I hate to admit it, but I didn’t because I knew I could score on the other end.  I didn’t worry about whether I let this girl have a basket because I knew I’d get it back.  In college, it’s not like that. You’ve got to defend every single moment, every play, you’ve got to keep going.  That’s what I try to pride myself on my work on defense.  They may be quicker than you, they may be faster than you, or older than you.  But just work.  Definity, it been a focus so for you to make that comment makes me happy.  It’s showing it’s paying off.

I’m glad I came here in the summer when I did.  I had an extra two months when I could learn the coaches, players, the system, the plays, all that they wanted me to do.  That and the season has helped me to lose that lost look and gain that confidence.  There is something between the lost and the confidence and that’s where I’m at right now. I’m definitely working on moving up on the confidence level.

Joe:  Other than basketball, what do you do?  What interests you?

Mackenzie: I love my dog. We’re going to go hiking and things like that.  I love to long board–skateboard.  When I was home I would do it on the beach on the board walk.  My other go-to things is to make smoothies.  I love making smoothies.  I make some good smoothies.  And, I love to color–not draw, color.

Joe: What are you studying?

Mackenzie: I’m an education major. As of right now, my goal is to become a math teacher.  That’s what I’m studying.  My whole family are teachers so it’s in my blood. However, I’m going to try to stick with coaching as long as I can while getting my degree in education.

Joe:  Thank you, Mackenzie,  for taking the time to do this today.