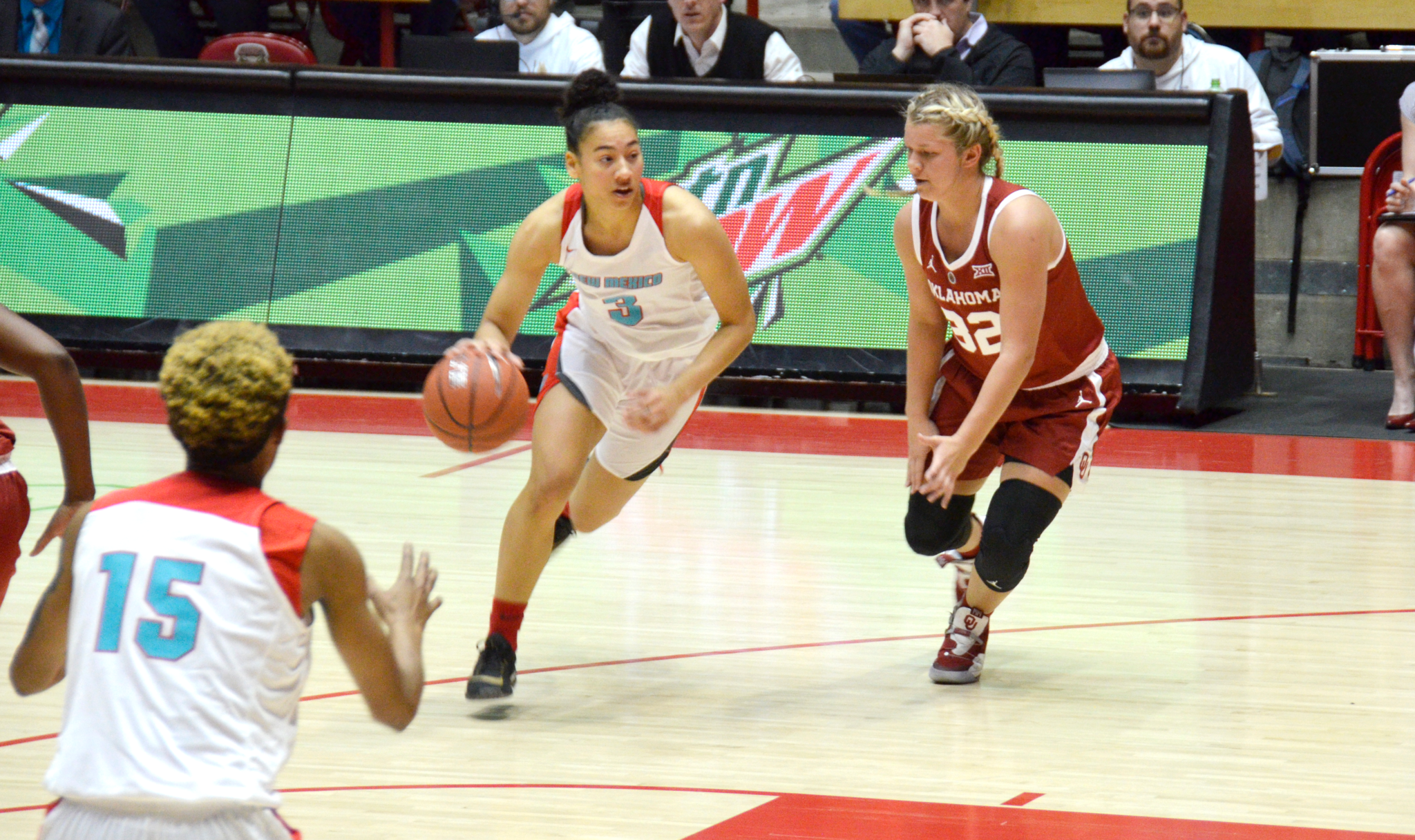 For the first four games of the season the Lobos prospered by leading the nation in 3 point baskets made per game, but in the rematch against Nevada the Lady Lobos were 0 for 10 from range in the first half, and only 4 for 19 for the game.  Instead they had to use their best defensive effort of the season and some timely offensive rebounding to defeat the Wolfpack 78-67 in a game that was much closer than the final score would imply.

The Lobos were led by junior guard Ahlise Hurst with 20 points on 7 for 15 shooting and 3 for 6 from three point distance (the rest of the Lobos were 1 for 13).  She played a team high 37 minutes and added three steals.

Because senior post Antonia Anderson was in early and persistent foul trouble, sophomore Autumn Watts saw extended minutes and led the team with 9 rebounds off the bench, six of them offensive.  She was getting most of those against a taller Nevada front court and added seven points.

The game itself was very different from Thursday’s first meeting of the two teams.  Nevada never led in that game, but took the first lead of the game today, and led essentially the entire first quarter.  It was Nevada ahead 16-12 at the end of one quarter.  The Wolfpack used a smaller 4-guard lineup today and made guarding the Lobo threes their priority.  No pressing, limited crashing the offensive boards, they raced back time to defend the three point line time and time again.  The Lobos got fewer open looks from deep, and when they did, the misses.  And missed.  And missed some more.

Since Nevada was focus on defending the three point shots, the UNM offense adapted.  Coming into this game the Lobos shot about half their shots from deep—today, less than one in three.  They drove more aggressively to the basket, shot more free throws, and had better success on the offensive boards.  At the end of the first half Nevada had shot better, but UNM had taken more shots, primarily because of an edge in turnovers.  The net result was a 34-33 Nevada lead at the half, a half that saw neither team lead by more than four points.

The third quarter started with both teams looking a little more ragged, and mental & physical errors on both sides.  Then, two minutes in, a pair of things changed.  Ahlise got a pass from LaTora Duff, squared up, and hit the Lobos’ first three point shot to tie the game at 36.  This and two more triples by Ahlise sparked a 13-1 Lobo run that turned a 33-36 deficit into a 46-37 Lobo lead.

But seconds after Ahlise’s first 3 pt basket, AT picked up her 4th foul and left the game.  The Lobo small team became smaller, and Nevada’s 6’3” post Megan Ormiston now had a substantial height and size advantage over whichever Lobo would guard her.  The general fan expectation was Nevada would go to what they used effectively in the second half of Thursday’s game—go inside and let Ormiston’s size dominate the boards and get close in shots.  It never materialized.  Nevada never fed her, and for the game Ormiston only took two shots and collected one rebound.

The Wolfpack did go on a 17-6 run of their own with AT out, and cut the UNM lead to only two points before a Corina FT made the score 55-52 at the end of quarter 3.  For the first time this season the Lobos had a tight game into the 4th Q.

De’Ja Hamilton opened the 4th quarter with a jumper to make it a one point game again, and Autumn came off the bench for Shai.  LaTascya found Autumn for a layup, and Nevada countered.  A few more empty trips for both teams, and then the key sequence of the game.

LaTora found her sister LaTascya for a three point basket, and LaTascya was fouled on the shot.  She missed the free throw, but Autumn knifed in between two Nevada players to get the offensive rebound and lay it in for a 5 point play.  Shortly later, LaTascya missed a three, and Autumn again crashed in for an offensive rebound and put back.  The 9-4 run put the Lobos back up by six, 64-58.

That seemed to energize the Lobos legs and deflate the Wolfpack.  A couple minutes later the Lobos used three driving layups and a short LaTora jumper to go on another 8-0 run and finally, with just under three minutes remaining the lead was up to twelve for New Mexico, 72-60.

Nevada cut it to seven, but no further.  Three late Lobo steals and taking some air out of the ball UNM won this one 78-67 to go 5-0 for the season.

Next up is a pair of games Thursday and Saturday at Utah State.