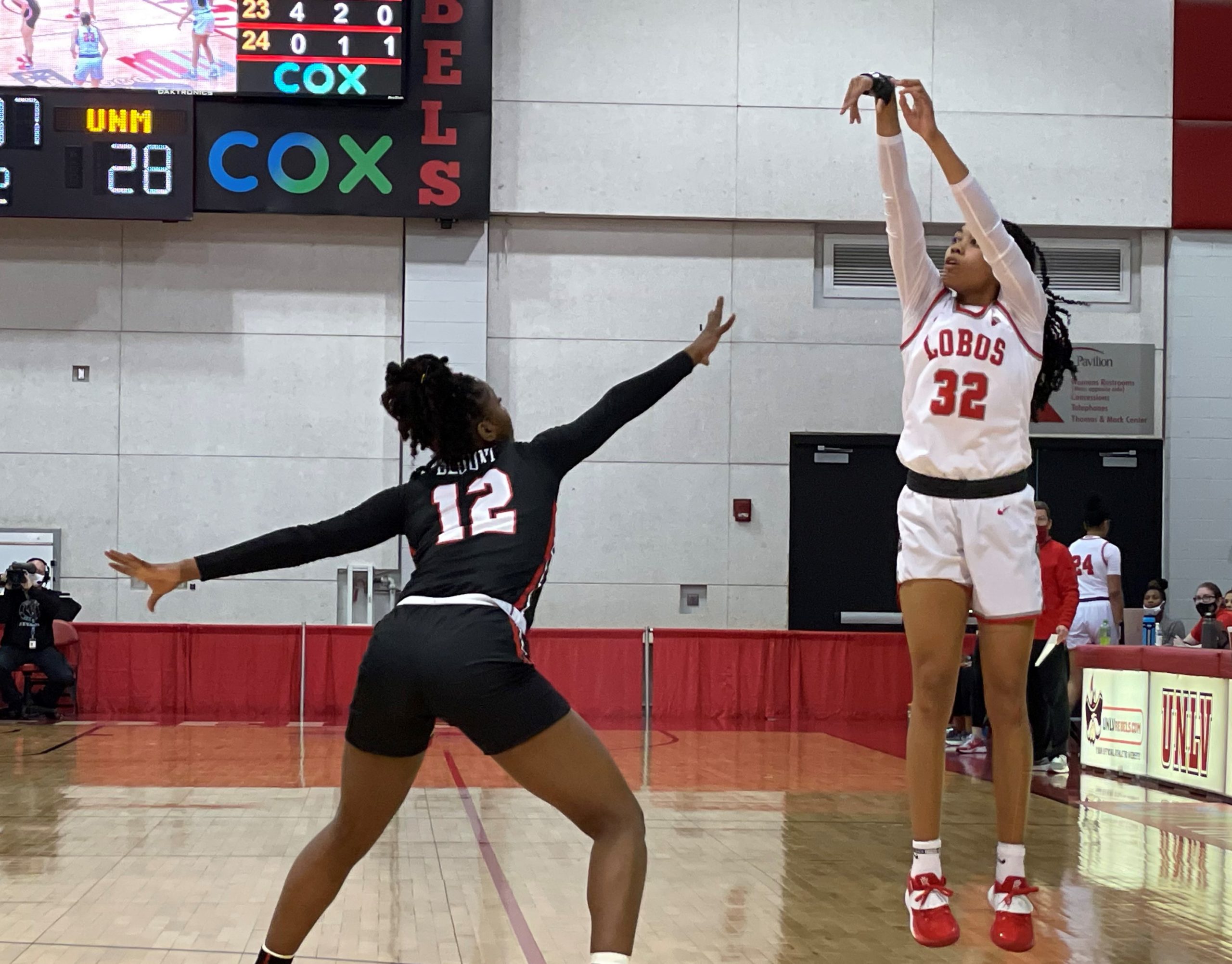 The Lobo women played defending MWC champs Fresno in their first “home game” on Thursday and had to make a number of adjustments on the fly to come away with an 82-80 victory in a game that neither team led by more than four points in the second half.  It was the kind of game that should have been played in front of 10,000 fans at the Pit, resulting in headaches and hoarse voices lasting for days.  It wasn’t, but this Lobo team continues to play the kind of basketball that deserves that kind of venue and fan support.

The Lobos used some hot shooting in the first quarter, and an 8-0 run, to go up 11 early.  But the Bulldogs went on a 13-0 run later in the half to retake the lead and go up by 5 as UNM shooting cooled.  The half ended with the Lobos ahead 38-34, and

Five Lobos scored in double figures, led by senior post Antonia Anderson with 16 (8 for 12 shooting) with 5 rebounds, 4 assists, and 4 blocks.  The other starting post, Shai McGruder, had 14 points on 7 for 9 shooting along with rebounds and 4 assists.  For the first time in conference play the Lobo posts were not dwarfed by the opponent’s posts, and both AT and Shia had a decided quickness advantage.

For most the season the Lobos have lived and died with the three point shot.  Today they were only 6 for 30 from distance, so they had to adjust.  They drove more, taking advantage that Fresno didn’t have 6-4 and 6-5 posts.  The Lobos actually outscored an opponent both in the paint (42 to 40) and on fast break points (8-4), while Fresno countered with 11 for 25 on threes, and an offensive rebound advantage 12-6.

In the end it was Lobo possession out of bounds with nine seconds left, game tied at 80.  It came down to two plays, and tonight the Lobos made them both.

First, Lobo inbound play.  It was drawn up to look for Shai isolated on a Bulldog post.  She cut off a screen, received the pass at the foul line, took one dribble along with one and a half long strides to lay the ball in, putting UNM up 82-80 with four seconds remaining.  Time out Fresno, ball advanced to the Fresno front court with a chance to win on a three point basket—of which they had made many already.

Second, Fresno inbound play.  The pass went towards Fresno’s Ali Gamez, but Ahlise Hurst reacted quicker, tipped the inbounds pass, grabbed it, and had the presence of mind to start dribbling as she was knocked to the ground so she didn’t travel.  Time ran out and the Lobos went to 4-1 and first place in the conference, percentage points ahead of 7-2 Colorado State.

This Lobo team will live on the edge all season.  They will give up size to almost every opponent, and will live & sometimes die on the strength of their outside shooting (tonight being an exception).  But the play team basketball, spread the scoring (seven players are averaging 7+ points per game), share the ball (they have assisted on over half the baskets this season, and all eight who played tonight had at least two assists), minimize turnovers (+4 per game), and for the most part play smart team defense.  Although undersized they have more than double the number of blocks their opponents have.  The play with energy and they look like they are enjoying playing basketball.  Tonight they came out on top.  They turn around an play the Bulldogs again on Saturday, starting at 11 AM Albuquerque time.