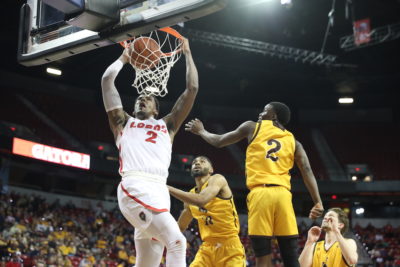 Redshirt sophomore Vance Jackson sparked momentum in the Lobo offense with a 13-0 run in the second period. Skyler Forman/The Lair

A hot second half allowed the University of New Mexico men’s basketball team to move on the next round of the Mountain West Tournament. The Lobos struggled at the beginning but managed to take down the Wyoming Cowboys 78-68 on Wednesday afternoon.

While four Lobos scored in double digits, it was redshirt sophomore Vance Jackson’s performance that sent the Thomas & Mack Center, known as Pit West to New Mexico fans, into loud cheers as if the team were playing in Albuquerque.

Jackson sparked momentum in the Lobo offense when he went on a 13-0 run in the second period. He went on to finish the day with 26 points.

New Mexico’s first half saw poor shooting (27.6 percent from the field) that led to an 11-point deficit at 38-27. The Lobos opened the second period looking different, starting by successfully completing their first two possessions. What kind of speech did head coach Paul Weir gave the team to create this type of change? Jackson said it was nothing too elaborate.

“It was kind of simple, just stay positive. The game is not over, it’s a long game. We have another 20 minutes,” Jackson paraphrased Weir’s speech. “We just have to come out with energy. Wyoming is a good team, they came out and punched us first. We were down 16 but we just have to keep our heads up, keep playing hard and just execute the game plan.”

The #7 Lobos will take on the #2 seed Utah State Aggies on Thursday at 6pm Pacific Time. The Aggies, who took a share of the MW regular season title, swept the Lobos with a 68-66 win in January and 71-55 in February.

Fortunately for New Mexico, the Lobos have shown they can succeed as the underdog. During the regular season, they took down the then-No. 6 Nevada 85-58 (the Wolf Pack’s first loss of the season) while playing at the Pit. UNM fans travel well, which helps give the Lobos a home court advantage type of feeling.

While not overconfident, Weir made it clear he felt that beating Utah State (a team he admitted has been more consistent and mature than UNM) is not something out of reach for his players.

“We control our own destiny. Provided we can do what we need to do, then we’ll have a chance to win games. I don’t think any of us have really walked away from a lot of  games going, ‘Man, that team was better than us in this game.'” Weir said. ” We walked back and said, ‘Geez, we turned the ball over this amount of times or we didn’t go to the offensive glass. Or we missed a lot of layups or missed a lot of threes.”

Notes
Senior guard Anthony Mathis broke the UNM recored for most three-pointers in one season (102). He has hit 103 throughout the 2018-19 season.