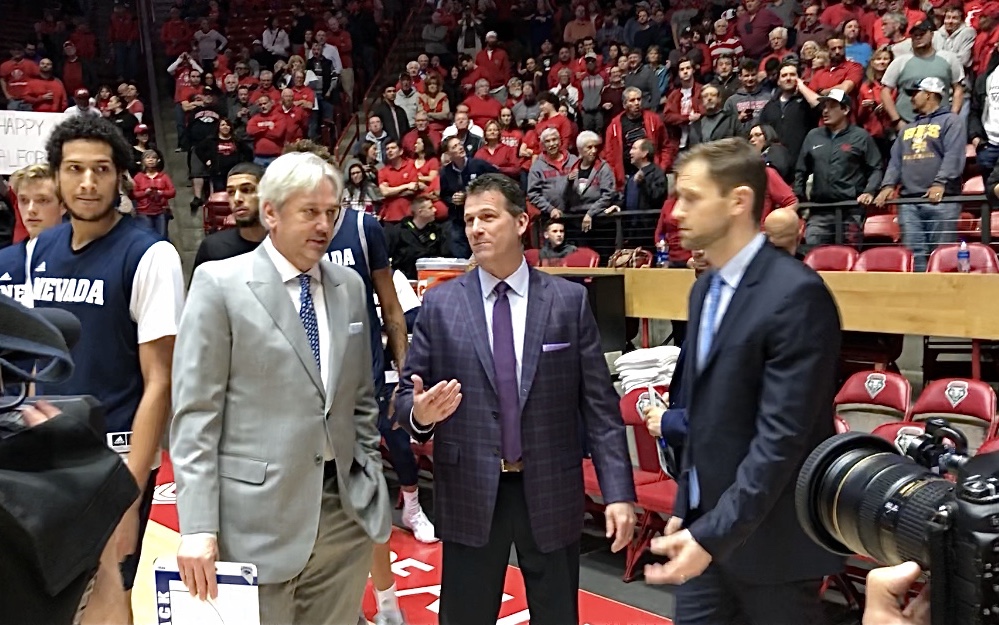 Alford’s Wolf Pack gets win at The Pit

The Pit was loud on Tuesday as Steve Alford and Craig Neal stepped in front of a crowd that once cheered for them as Lobo coaches. The excitement began to fall as the Lobos started falling behind and New Mexico ended up with a 88-74 loss.

Check out Alford talks about his return to The Pit.

New Mexico head coach Paul Weir said his team looked like they were working hard for each point, while the opponent made scoring look easy.

Earlier in the season, Weir made it clear that his team would focus on scoring inside. On Tuesday, this just wasn’t happening for the Lobos. Sure he said part of it was the big men the Wolf Pack kept on the floor to protect the basket, but New Mexico was also just not finishing well.

“Off the top of my head, six missed layups for sure. Without being able to score around there, it just couldn’t open anything up,” Weir said during the postgame press conference. “It’s almost like they were allowing us to get in and miss. Without being able for those to go down, or get to the free throw line, now we are relying on trying to make shots and that’s not something we’ve ever been great at ourselves.”

The game was close at the beginning, but the Lobos couldn’t get any closer than seven points during the second period. With 52 seconds left, Nevada held a very comfortable 17-point lead.

New Mexico finished the night shooting at 38.3% from the field. Redshirt senior JaQuan Lyle finally had a better result in the offense, leading the Lobos with 16 points. However, his shooting left much to be desired as he went 6-for-14 from the field. Vance Jackson, Keith McGee and Makuach Maluach also saw double digits with 15 points for Jackson, and 11 each for McGee and Makuach.

Meanwhile, Nevada shot at 50% from the field with junior guard Jalen Harris’s 26 points leading all scorers. He also led everyone in rebounds with nine. Jazz Johnson had 15 points, while Lindsey Drew and Zane Meeks had 14 a piece.

Jalen gets the board and takes it coast-to-coast (with a nice little Euro step) to put us up five! Jalen has 13 already with 10 to go in the first half.#BattleBorn pic.twitter.com/mnMyMxoypU

“We were trying. Every time it seemed like we were on the verge, somebody stepped up on their team and made a big shot,” Weir said. “You have to give them credit for being able to go on the road and shoot that well and make those big shots.”

Tuesday’s result had bigger consequences for the Lobos than just another mark on the losses column. New Mexico can no longer make it in the top five of the conference, which means no first-round bye for the Mountain West Tournament in March.

Up next, New Mexico has back-to-back road games starting with Boise State on Feb. 23 and then Air Force on Jan. 26.