A day after UNM announced the hiring of Isaac Chew and Andy Hill as assistants on the men’s basketball team, Coach Pitino held a brief press conference primarily to address questions about the two new members of staff. 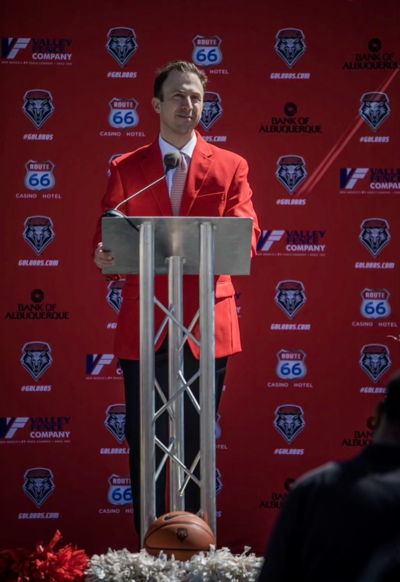 It was as one would expect:  he extoled their virtues as knowledgeable, hard working coaches who would be great assets to the team.  Responding to direct questions he did explain his staff philosophy a little:  he does not expect any of his coaches to be specialists—no “big man coach”, or “recruiting coach”, but rather that everyone on the staff can (and will) step up to handle the full range of coaching tasks.  Part of that (with no elaboration) was that all the assistants come with their recruiting contacts, lists, and opinions that will be melded into the collective Lobo recruiting knowledge base.

Speaking of recruiting, the impression he gave is that in a “normal” year, he will rely heavily on recruiting High School players and then depending upon the staff to develop/improve them during their UNM careers.  However this is not a normal year, and he would likely depend more on the transfer portal this summer.  Not because of an excessive focus on “win now”, but rather because COVID has made HS recruiting near impossible to do well because of the lack of face, while recruiting.  With transfers he can at least see some tape from the past year and talk with the former college staff.  While establishing the cohesive team framework means it is good to get new players in “soon”, it is a higher priority to get the right players.

Even when unbidden, Coach was again very complementary about the current players, their attitude, work ethic, and how they have openly embraced him.  He specifically mentioned he has talked with Bayron Matos, but not face to face yet (Matos recently returned to New Mexico and is in COVID time-out), but the others who have entered the transfer portal are not in Albuquerque.  When asked if Makuach Maluach might return for a 5th season as the two WBB seniors will, he was non-committal but said he was talking with Makuach and hoped to influence his decision the more they talked.  Matos was the only senior he mentioned he had talked with.