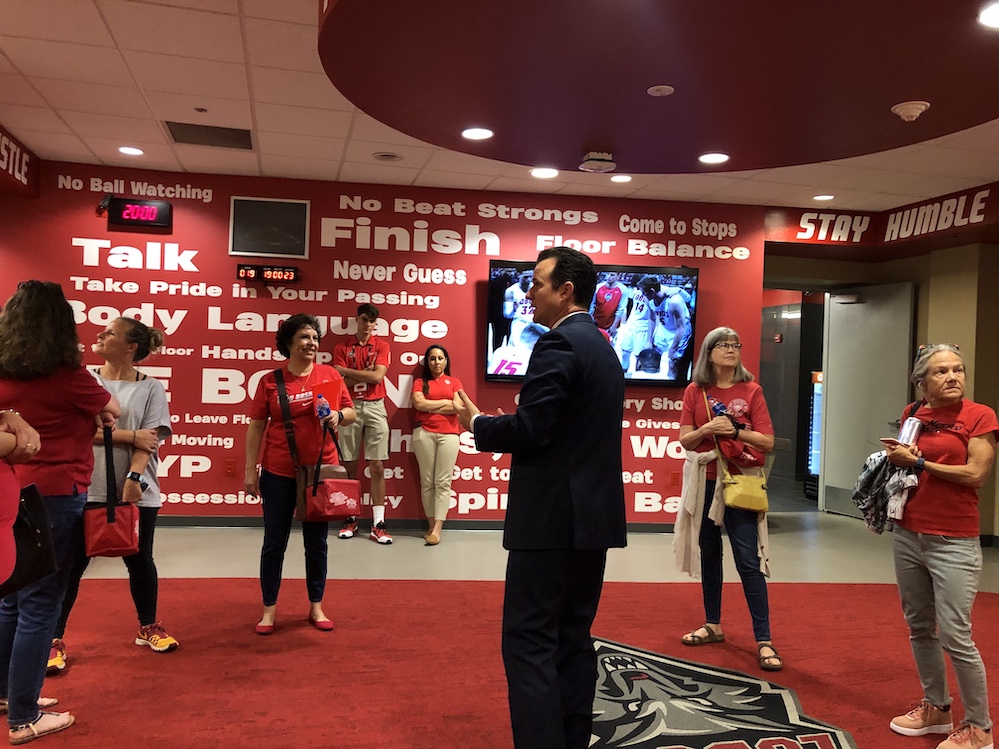 Behind the scenes of Lobo basketball – Women's Walkthrough

I attended the first New Mexico men’s basketball Women’s Walkthrough on Thursday and I thought it would be fun to share the overall experience and talk about some of the inside access stuff that was shown.
I’ve never attended the football clinic, but I’ve heard that one has participants do a lot of the workouts that players do. That’s what I thought this event would be like but it was actually more of a behind-the-scenes kind of thing. My job requires me to spend a lot of time at The Pit but there were some things I actually hadn’t seen before. So if you’re looking for a good basketball workout this is not for you. But if you’re wanting to see the facilities and get a good sense of what players and staff do on a daily basis, it’s worth checking out.
Weir said the football clinic was where the staff got the original idea, but the basketball team wanted to add their own twist.
“We kind of turned it into a recruiting visit,” Weir explained. “This is what we do with recruits. We bring them in, show them a lot of different parts of the program. We thought it would be a cool idea to invite women, probably a big part of our population that doesn’t get a lot of inside access to see what goes on with Lobo basketball.”
Everyone was divided into groups at the beginning of the event and there were staff members in different areas explaining certain aspects of the program.
Main locker room – Paul Weir
Weir was there explaining how players’ own spaces were meant to help them keep their goals in focus. Everyone has a board where they have text and images that represent their goals. Carlton Bragg, a senior, has a diploma that reminds him that graduation is coming up. He also has a motivational phrase that he can look at every time he starts doubting himself.
“It’s their own space so they can do whatever they want with it,” Weir said. “But I also try to help them develop and grow with dream boards and quotes and all of that, to hopefully get them in a good space, surround them with positive, uplifting, growth-oriented kind of reminders.”
Above each player’s area there is a list of other players who have worn their specific numbers. The head coach said it is important for them to know who they are representing when they are out on the court. Fun fact, Hugh Greenwood said that when Weir first arrived, he got a letter from Antino Jackson thanking him for his contribution to Lobo basketball. Greenwood and Jackson both wore the #3 jersey.

There is another area that’s part of the locker room with bean bags that players use to take naps. The room is meant to be an area to relax. Weir put up a little library with photos of Steph Curry, Barack Obama and LeBron James reading. He joked that hopefully one day he will catch a player being bored and picking up a book.
Coaches room – Brandon Mason
Mason was in the coaches room where they have whiteboards with some plays, dates and recruiting stuff that I unfortunately can’t share here. But stuff like that is what is discussed in the 6th man club 😉
Mason did say that Jaylen Clark and Bayron Matos are important names on the staff’s list right now. Quick reminder that Matos is going to be on an official visit this weekend and will be arriving Friday afternoon.
Mason showed a sheet that coaches fill out when they go scout a player. There are three columns that say “above our level,” “at our level” and “below our level.” The skills they look at are foot speed, length, shooting ability, motor and good teammate. There are also sections for medical history, academics and comments.
Film room – Craig Snow
When we entered the film room, Snow had put up a funny image that made everyone laugh (see tweet below). The first time I interacted with him he mentioned The Office, now I can confirm he does have a little bit of Dwight Schrute in him.

Snow talked about the Lobos playing inside-out, as well as the importance of creating and limiting turnovers. On a whiteboard there are a couple things written about the team’s offense:

A pretty cool part of this station was that the assistant coach broke down some film from yesterday’s practice and talked about some players’ abilities. Jaquan Lyle had a pretty sweet behind-the-back pass.
Other areas
Game day locker room: Dan McHale, in charge of defense, gave an example of what a scouting report looks like. As an example he showed one of Utah State. It listed players and their stats, as well as comments on their strengths and weaknesses that the Lobos need to learn.
Weight room: Jerome Robinson showed the weight room and talked about the strongman competition. He also showed the little kitchen where players get breakfast every morning, as well as vitamins, shakes and healthy snacks.
Davalos: Ralph Davis was at the practice facility with some of the student managers. Davis talked about the facility and then had everyone try shooting free throws.
Media room: Geoff Grammar from the Albuquerque Journal was there to talk about press conferences. People pointed out that it is a lot smaller in person, especially the backdrop that you typically see behind coaches and players. The communications person for the team was also there. She said that players get an hour of media training before the season starts so they know what is appropriate for social media and how to answer tough questions that might be asked by reporters.
Suites: The premium seating director was there and explained what watching games there was like and everything a suite included.
Lunch room: I’m not sure what this room is called but it’s by the offices and by Davalos. It has some tables where players can eat and also a ping pong table. Weir’s wife was there along with McHale’s and Snow’s wives. They were very casual and friendly, having conversations about their experiences being part of the basketball community and living in Albuquerque.