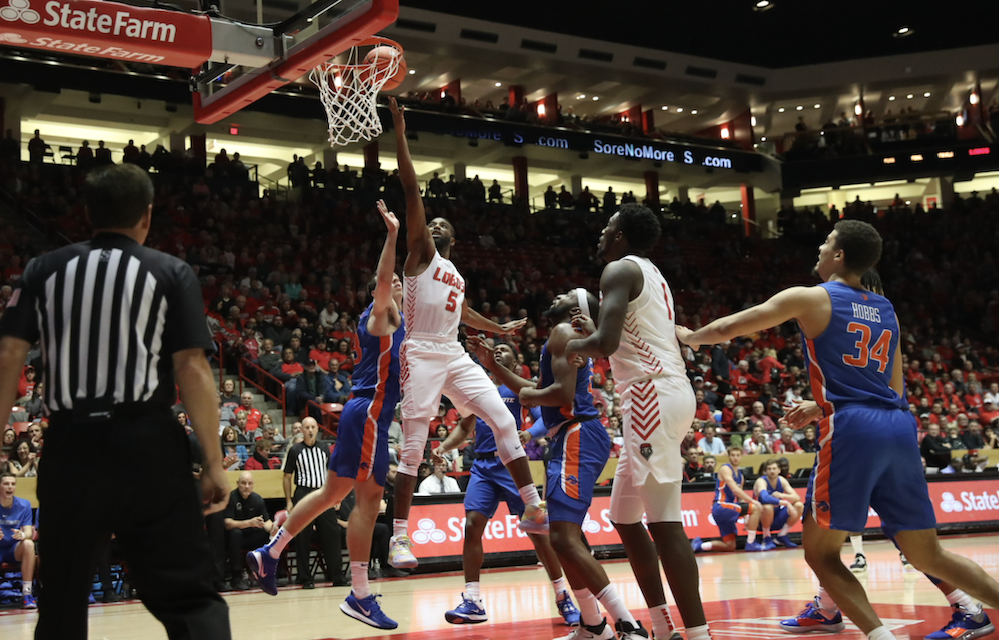 Just like last year, Boise State had a real chance at walking away with a win at The Pit. But once again, New Mexico held tight in the last couple seconds to pull off the victory.

The 2019-20 Lobos started Mountain West play 1-0 on Wednesday after taking down Boise State 80-78 in Albuquerque. The battle saw 10 ties and 17 lead changes.

New Mexico head coach Paul Weir said last week that the Lobos are not focused on taking a lot of three-pointers. He explained that his team’s strategy when it comes to defense is to push opponents toward taking threes instead of letting them go inside. However, Weir also said that he would change the plan if needed. Boise State gave the Lobos’ original strategy a run for its money.

The Broncos shot at 50% from the beyond the arc going 14-for-28. Senior guard Justinian Jessup, who led the Broncos with 24 points, had six three-pointers. Senior guard Marcus Dickinson had four of them.

Justinian Jessup puts the Broncos back in front with his career-high-tying SIXTH three-pointer of the night! pic.twitter.com/5Ui0CNI9Mi

“We kind of came into the game worried about their three-point shooting but they just have not shot the ball very well at all,” Weir said. “Jessup obviously is a key component to them but his numbers were so bad coming in you are kind of guarding as to what he can do potentially, but you’re also looking at the numbers. But once he got going, he got going.”

The coach mentioned Dickinson and said he came out of nowhere, playing in a way that also forced the Lobos to make adjustments.

New Mexico saw half the attempts from beyond the arc as Boise State had, but the Lobos’ percentage was not nearly as good. They were at 21.4% by only making 3 out of 14.

The UNM offense was lead by JaQuan, who scored 31 points, six assists and four rebounds. This is the second time this season that Lyle reaches 31 points.

With a minute left in the game, Lyle found himself on the charity line and made both attempts to put the Lobos at a 77-76 advantage. With 46 seconds remaining, Boise State also got on the line and took at 78-77 lead.

Carlton Bragg, who collected 17 points, got the last field goal of the night with 34 seconds on the clock..

Carlton Bragg @carltonbragg31 with what could be the game winner. Lobos up 79-78. Only 18 seconds remaining. pic.twitter.com/AiP0Q7e7ls

Jessup was hot pretty much all night but he missed a jumper with 18 left. The reason? A Makuach Maulach block. Boise State got the rebound but Alex Hobbs missed a three pointer.

Jessup went on to commit a foul and Boise State called a 30 second timeout. New Mexico got its last point of the night from a Zane Martin free throw. But the game wasn’t over yet.

The Broncos had the ball with 0.9 left on the clock, with the play starting close to the basket they were aiming for. The Lobo defense was able to put enough pressure to not allow a buzzer beater game winner.

Weir gave big props to his players for being able to make adjustments and to have the determination it takes to finish close games.

“I can honestly tell you that we have not gone into a timeout at UTEP, New Mexico State, here, McNeese, where there has ever been a bit of panic on their part. In my time of coaching that is incredibly unusual,” Weir said. “These guys are just confident and I think it was just enough to get the win tonight.”

Up next, the Lobos head to Laramie to take on the Wyoming Cowboys on Saturday afternoon.