Carlton Bragg: Jack of all trades

Carlton Bragg is more than a basketball player. He says he learned to stay out of trouble by keeping busy with healthy activities like playing piano and roller skating. Scott Forman/The Lobo Lair

Carlton Bragg has skated through life, but only in the literal sense.

The 6’11” New Mexico basketball player said he has always liked staying busy to limit his chances of finding trouble. A pair of skates proved to be one of the best solutions.

“It was tough growing up,” he recounted. “I’m from Cleveland, Ohio. A lot of killings and stuff going on. I used to roller skate, which I still do. That’s what kept me out of trouble.”

A 360 or a 540 jump? Bragg can do those easily. His favorite movies are those that feature roller skating; ATL and Roll Bounce are some of the ones he enjoys the most. Vance Jackson and a couple other teammates sometimes join Bragg at the rink, although their skill level is a little different.

“They’re not as good, but they try,” he chuckled.

Bragg is a self-described “jack of all trades.” He played baseball before he had a growth spurt and started basketball in ninth grade. He loves being active but sometimes a relaxing activity like fishing is all he wants to do. But don’t expect any fishing stories from him right away, because Bragg doesn’t share those with just anyone.

While basketball is what has gotten him well-known, his social media shows his passion for piano. Bragg’s Instagram profile photo is him during a piano performance. He has posted a couple of videos showcasing his musical talent, which comes from playing by ear since he can’t read music too well.

Bragg has a lot of passions, but his face lights up the most when he talks about his son.

Carlton Bragg III turned two years old last Thursday. While Bragg admitted that balancing school, basketball and having a child is a lot of responsibility, his son is always at the top of the priority list. One of his favorite father-son activities is to go to the gym and watch the toddler attempt to shoot a basketball.

Bragg’s life has changed a lot in the last couple of years. The former McDonald’s All American was a 5-star recruit ranked in the top 25 in the nation. In 2015, he competed in the World University Games and helped USA win a gold medal in Gwangju, Korea.

His college career began at Kansas, where he appeared in 38 games and averaged 8.9 minutes during the 2015-16 campaign. He registered 31 games with an average of 13.8 minutes the following year. But after two seasons and a couple off-the-court issues, Bragg wanted a fresh start and decided to transfer.

His next destination was Arizona State. Bragg was on the move again before completing the year of waiting required by the NCAA so he never saw the court as a Sun Devil. He had to wait a semester at UNM before he could suit up as a Lobo, but he officially walked down the ramp on December 16, 2018. 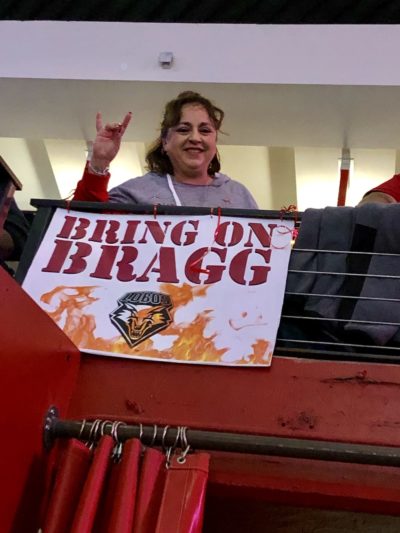 Fans welcomed Bragg eagerly as he played his first game as a Lobo on Dec. 2018.

Bragg hadn’t played since March 23, 2017 and he admitted he was nervous for that first game at The Pit. A kiss from his son helped him feel more comfortable, although there wasn’t much to be scared of since fans welcomed him warmly.

“The standing ovation, I felt it. It gave me butterflies,” the player said after the game.

Having to wait to play again made him appreciate the sport and the process even more, and was thankful New Mexico gave him a chance to continue his basketball career while also getting a degree.

In April, Bragg announced he wants to stay in school and graduate in New Mexico so he can finish what he started. He said he has learned to accept himself and grown into a more mature person. The lessons Bragg has learned throughout his life haven’t been easy but his goal is to use them to help others.

If he couldn’t pursue a professional basketball career, Bragg decided he wants to be a coach so he can be a mentor and help people change their lives for the better. Having a son made him think about how important it is to have a good role model.

“He really changed my life and motivated me even more because I have someone that is looking up,” Bragg said. “I want to be a role model for the community, a mentor. Coming from where I came from and the position where I am in now, I want to help others do the same and go higher.”