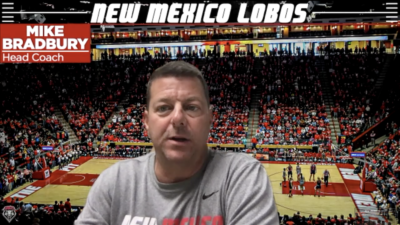 The Lobo Women’s Mountain West Conference schedule was released a few days ago, containing 18 conference games starting with the opener on New Year’s Eve in Las Vegas against UNLV.  Today Coach Bradbury had his first press conference of the Fall to talk about the team, answer some questions, and admit that there is a lot that is still unknown.

Travel restrictions, different state and conference restrictions, and financial limitations severely restructured the schedule.  Off are schools like Arizona State and o big names.  On are schools close by, and not as high profile.  NMSU is still a two-game home and home series.  Northern Arizona was a late add, as was the University of the Southwest in Hobbs.  There will also be a trip to Texas for some games.  The entire non-conference schedule will be released once all the contracts are signed.  Geography and cost will be the overriding factors.

The first game will be November 25th, at home (opponent not yet identified), and the team still has a large number of unknowns.  The roster has fourteen players, the same fourteen that were known in the Spring.  The team will be thinner and far less experienced in the post with Azaria (Soph), Celine (RS Fr) and Nevaeh Parkinson (Fr).  Celine is the tallest at 6’4”, but also has the best outside shot.  Gone are Jaisa, Nike, and Jordan—experienced low block post players.  The offense will be different, much more perimeter oriented and built to open the floor for any player to potentially attack the basket depending upon the defense.

AT, Shai, and Autumn will be “tall wings”, and from there the roster be made up of eight guards.  The primary point guards appear to be Corina and LaTora Duff, one of the JuCo twins transferring in from Shelton State CC.  Playing time decisions are a long ways away, mostly because of the limitations on practice.  Even now the primary work has been shooting, individual ball handling, and running offenses with no defenders:  3 on 0 and 5 on 0.  Rebounding, defensive pressure, and any other contact work is not yet permitted.

As would be expected, the team morale has gone through ups and downs.  When everything was completely unknown early in the Spring/Summer it was tough.  Ball players want to play ball.  When things started to become more active in August, the mood improved.  But until there can be more five on five contact work it will be difficult to tell where things are, who will emerge as the leaders, and how PT will sort out.  Mike did say he was pleased with the attitude and work ethic, especially given the real world environment.

Practices are still not open for viewing, and questions about fans in the seats are still unknowns, but hopefully that might change—one of these days.