Danny Gonzales and the Lobos are ready for home debut 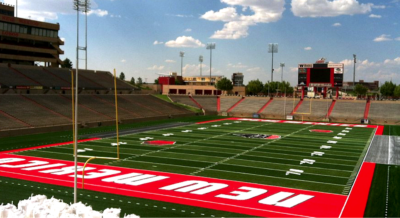 The New Mexico football team is getting ready to play its first home game in 642 days, while Danny Gonzales coaches his first game in Albuquerque.

“It’s exciting that we get to do this,” the head coach said. “I want to paint this town Cherry and fill this place up.”

The Lobos are hosting Houston Baptist on Thursday evening to kick off the 2021 season. The Huskies only played four games last year. They picked up losses against North Texas, Texas Tech and Louisiana Tech, but wrapped up their short campaign with a 33-30 win against Eastern Kentucky.

HBU is 0-8 against FBS opponents, but Gonzales warned against getting too comfortable.

The Huskies scored at least 31 points in each of their four games. Their offense was productive, but they lost some key players there. Gonzales, however, said this doesn’t mean their offensive scheme won’t be good. Sophomore Blaise Bentsen was used as the running quarterback last season, but this year he will be the starter. Gonzales called him a “big time runner” but also said that his high school tape shows his ability to throw.

The Lobo defense won’t be able to relax, as they allowed an average of 32.6 points in their seven games last season. The Huskies didn’t have a particularly great defense in 2020 either. They allowed North Texas 57 points and Louisiana Tech 66 points.

UNM has great potential in the offense behind Kentucky transfer Terry Wilson, who was confirmed as the starting quarterback two weeks ago. Wilson went 17-8 as a starter in Kentucky and is the only Wildcat in school history to record 3,000 career passing yards (3,436) and 1,000 rushing yards (1,015).

New Mexico wrapped up the 2020 season with back-to-back wins, although the 2-5 record wasn’t particularly impressive. Gonzales said the program has a “habit of losing” but that they are working on breaking that habit. He said his players sacrificed a lot last year by relocating to Las Vegas in order to be able to play through the pandemic, and that he hopes fans show up to support them at home while they still work on turning things around.

“You win, they’ll come. I know that,” Gonzales said when talking about fans. “We are going to win plenty around here. I want people to believe in what we are doing.”

“Our current football team represents the past. All those things that those guys did to give them what they have today needs to be honored,” Gonzales said.