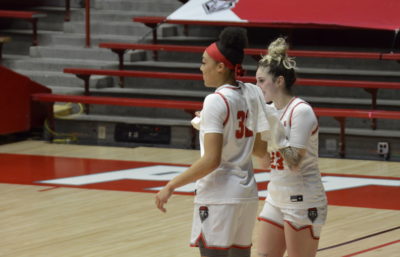 New Mexico seniors Jaedyn De La Cerda and Antonia Anderson will return to the Lobo women’s basketball team for the 2021-22 season, they announced on Thursday.

The NCAA granted an extra year of eligibility for student-athletes after the 2020-21 season due to COVID-19. Both De La Cerda and Anderson took advantage of the opportunity after spending four years with New Mexico.

They were part of a roster that won the Mountain West conference regular season title, an achievement that was more difficult to obtain than usual since they spent most of the season on the road. They finished with a 15-5 record after falling to California Baptist 85-90 in the first round of the WNIT Tournament.

“Even with the success that we had this past year, we still have unfinished business and bigger goals to accomplish,” read Anderson’s official statement.“The plan is to do that in front of our fans in The Pit.”

The Lobos weren’t able to play many games at The Pit due to the state’s COVID-19 restrictions. Their first and only games in Albuquerque were for the Colorado State series March 4-5.

“Honestly, it’s a blessing to be able to play for Mike [Bradbury] again,” read De La Cerda’s statement. “There aren’t a lot of colleges who are bringing back two of their seniors and we were given that opportunity. I cannot wait to play in front of Albuquerque one more time. Let’s get to business, Lobo fans!”

Their return, assuming no more Lobos enter the transfer portal, means New Mexico could be returning all of their starters, as well as their most consistent scorers.