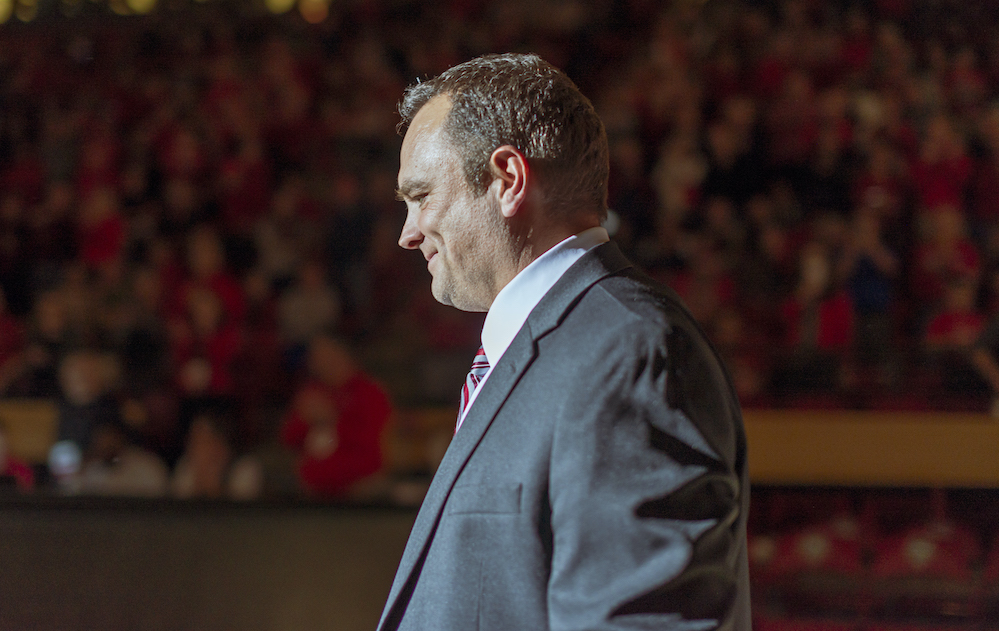 Gonzales focused on strong foundation and long-term results from recruiting

Danny Gonzales is not looking for a quick buzz for the program and then have it fade away. The New Mexico football head coach made it clear his staff is looking to build a solid foundation to start a new successful era for the Lobos.

The staff has been working hard, well past midnight in more than one occasion, during the last couple weeks to try to find their newest group of players.

“We have some young coaches who are recruiting until midnight, 1am, and the phones are going off. We got coaches, myself included, that will turn off our phones at 1am because we want to get some sleep,” Gonzales laughed.

On Wednesday, UNM organized an event for fans to celebrate National Signing Day. The coaching staff walked around a room at BJ’s Brewhouse introducing themselves to everyone. Gonzales addressed the crowd and media to tell them how excited he was about the incoming players and explain how some decisions were made.

“This class is going to be the foundation that we build upon. I think the coaches have done a phenomenal job getting this class together that we signed today,” he said. “I’m extremely proud of the guys that we signed. On paper they look like good football players, we’ll see in the next two years how we develop them.”

“The No.1 goal of the program is to win our fifth conference championship and work our way to 10.” –@CoachGonzUNM @UNMLoboFB

The program announced that 23 players signed on Wednesday. The head coach said there had been spots to fill everywhere, but there were a few key things he was looking for.

Gonzales needed more offensive linemen. Not only did the staff sign a handful of them, they are getting an experienced player in 6’4″ 275lbs graduate transfer Ben Davis, who is coming from Minnesota.

Height and length in receivers were also a focus. Elijah Queen from Carson, Calif., and Jace Taylor from Lake Havasu, Ariz. are two 6’5″ wide receivers who meet that requirement.

A new quarterback has not been found yet. Gonzales said his staff was not completely happy with the quarterbacks they had been looking at, but this is not something they are stressing about yet.

“We had a couple guys we were recruiting that didn’t work out…We’ll find a quarterback, we have some in the program who have played and have experience. I’m not worried about that, I will not take a guy just to sign a guy.”

The recruiting class is heavily made up of current high school players. Other than Davis, the other player not coming straight from high school is Isaak Gutierrez from Butte College. The junior college recruit has four years to play three seasons, which gives the staff the opportunity to redshirt him if needed.

“We were not going to get a junior college kid who has two years to play. This is going to be a program-building class,” Gonzales explained. “That should be the concept of the next three classes. We might take a couple grad transfers because of the 33 seniors that we lose, but we are going to build this thing off freshmen for the long term.”

New Mexico’s season opener at CSU canceled
Three Lobos get a shot at the NFL
Even without fall football, Danny Gonzales has high expectations
Football 64