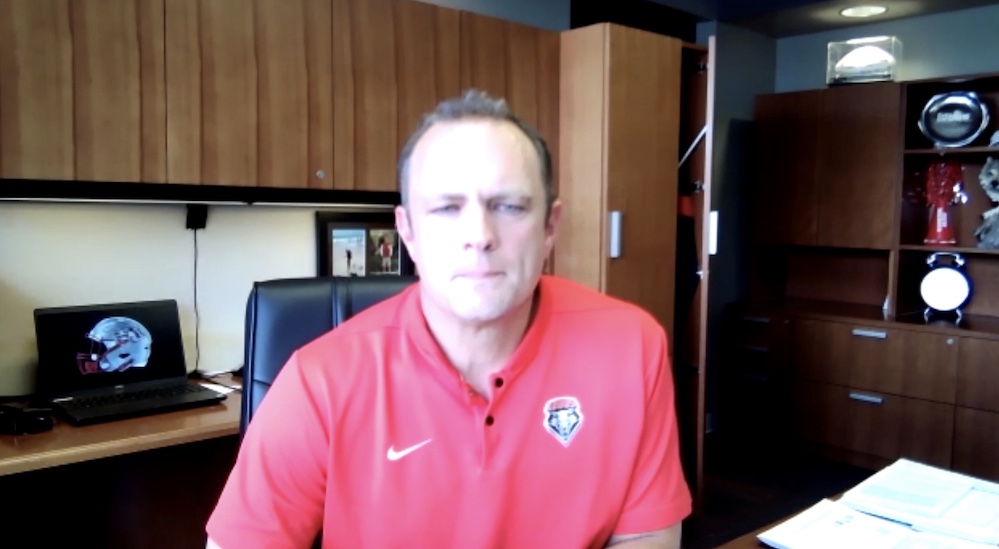 Even without fall football, Danny Gonzales has high expectations

When he became the football head coach at the University of New Mexico last December, Danny Gonzales said he was going to turn the program around. Even in the middle of a pandemic and all the problems that might come from it, his plan has not changed.

On Monday, the Mountain West conference indefinitely suspended fall sports, including football. Probably not something Gonzales could’ve ever imagined happening during his first season as the Lobo coach. He is disappointed but he also respects the decision.

“We said it from the very beginning. The decision makers who have the best information at the time, to their knowledge, will do the best job to put us in the direction we need to go, and that’s where we are at,” he said.

Gonzales said football is an emotional game, so being emotionally tough is part of it. One of his biggest responsibilities as a coach, he explained, is to teach young men how to deal with adversity and fight through it. He believes players are safest when they are around the UNM facility because of protocols and staff making sure everyone stays safe. Now that there won’t be football played in 2020, Gonzales still feels the team can stay focused.

Part of it is the workouts that are still happening. A normal schedule involves workouts that start at 7am and continue until around noon before classes. The staff will adjust however necessary, but so far Gonzales thinks this structures helps players with their overall focus. The expectations for success remain the same, but this success doesn’t have to do with football.

“The number one priority of our program is to get the guys to graduate. That’s their ticket in life, I tell them all the time,” Gonzales said. “If you’re crazy enough to get into coaching you can make a career out of it. But playing is not a career, it’s an opportunity. Even if you’re like Brian Urlacher who played 13 years in the league.”

Workouts help with focus, education is top priority and parties are still not acceptable. pic.twitter.com/WnJa1kTNaJ

The coach said that players have been in quarantine and so have been good at following the rules. During a press conference at the end of July, Gonzales said that players breaking rules by doing things such as throwing a party would mean they are no longer part of the team. Even without competition this year, players will still not be let off the hook.

“When you join a team, there’s certain rights and privileges that you give up if the team is the most important thing to you,” he said on Tuesday, his latest media availability. “Those certain rights and privileges right now are going out to parties, going out and hanging out in big groups. Those are the things that we are expecting them to give up. Our guys have done a great job so far and we are going to keep harping that message.”

Schools like New Mexico will certainly face financial issues without the revenue coming in from playing. The conference could potentially allow games in the spring, but if the situation doesn’t improve, the season could be complete cancelled. Gonzales was asked about that possibility.

His answer was that he wanted to stay positive, but in the event that there was no football until next fall, he said he wasn’t above helping his school in other ways.

“I might become a fundraiser more than a football coach, but you know what? It is what it is… Am I willing to be a full time fundraiser? If that’s what it takes to win the fifth conference championship for this school, you are dang right I’ll do it.”

Gonzales said he didn’t want to sound “arrogant” but he is willing to bet on himself and his team. He said he believes in what New Mexico is doing and that they will successfully turn the program around, this pandemic is just another roadblock along the way.