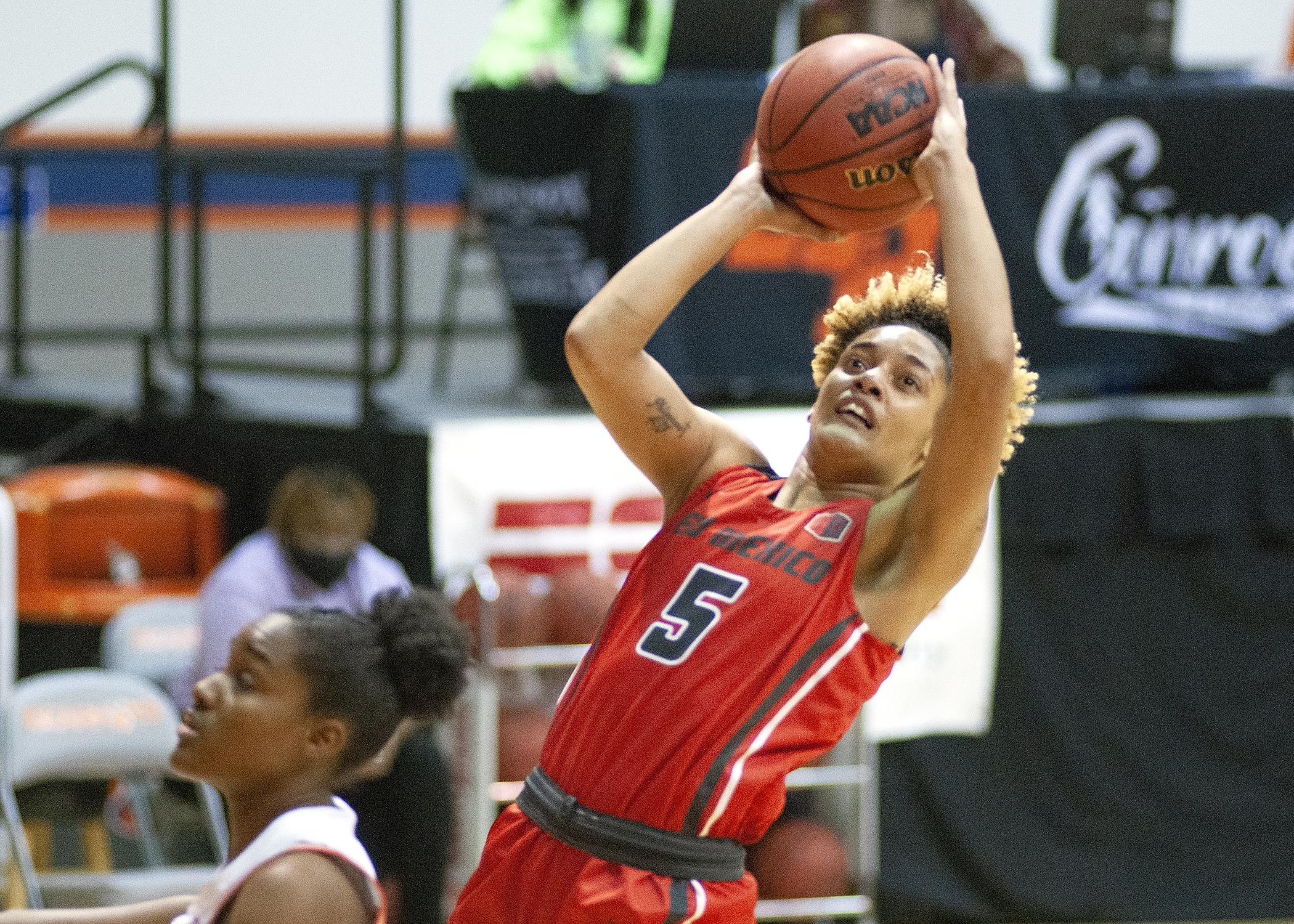 The opening of Mountain West Conference play promised to be a higher level of competition for the lobos than their three non-conference games, but when you blitz the opponent with a 17-0 run right out of the gate, it has the same result, a relatively easy UNM win.  The Lobos opened up a 23-4 lead, took it to 28-8 at the end of the first quarter, and went on to a final score of 88-69.

After the quarter the game was not seriously in question, though Nevada rallied after halftime to cut the lead to 16 with the ball, but a couple Jaedyn threes and a nice driving layup by Coina Carter pushed the led over 20 again and it was never

The strengths of this Lobo team were evident throughout.  Balanced scoring with again five Lobos in double figures, led by Jaedyn De La Cerda’s 21.  Jaedyn also led the team with both 9 rebounds and 5 assists.

Shai McGruder had 15 points, most on backdoor layups and driving layups off steals, though she also hit one of the two three-pointers she took.  Shai also contributed 4 rebounds and 3 steals.

As a team the Lobos were shooting well all night, but especially in the first half when they made 21 of 37 shots (57%) including 8 of 17 threes (47%).  For the game they shot 52% and 47% respectively.  The high shooting percentages were driven in large part by continued good ball movement leading to mostly good shots—though Nevada’s defense didn’t leave yje Lobo shooters as open as they had been in earlier games.

The other Lobo strength was taking care of the ball.  Although they played at a fast pace all game, they only committed 11 turnovers, and several of those have to be credited to the Nevada D.  There were few unforced errors or wild passes.  Nevada pressed UNM in the first half, but it was not troubling the Lobos, and often led to open three point shots; in the second half the largely stopped pressing.

If the strengths were on display, so were the weaknesses.  The Wolfpack outrebounded UNM by nine, and the offensive rebound margin was worse, Nevada having a 19-6 edge there, and in the third quarter Nevada used that edge to outscore UNM 25-16.  That was the one quarter the Lobo shooting was only “good”, not “very good”, and that coupled with Nevada rebounds getting then 10 more shots clearly showed a concern that will likely bite the Lobos numerous times this year.  Part of the problem in the third quarter was having AT in foul trouble and on the bench.  That exacerbated it, but even when she was on the court Nevada was taller and bigger and started using the size more effectively in the second half.  It is reasonable to expect that they will do so in Saturday’s rematch as well.

Nevada’s 6’3 junior transfer Megan Ormiston led the Wolfpack with 9 rebounds, and constantly drew two Lobo defenders whenever she touched the ball.  In the second half, feeding her the ball inside became a priority, and the Lobo defenders were not tall enough to contest many of her shots without fouling.  Fouling—and the resultant free throw disparity—was another area for long term Lobo concern.  The Lobos were called for 20 fouls, giving Nevada 20 free throws, while the Wolfpack only committed 11 fouls, and the Lobos only shot 6 FTs.  Guard Nia Alexander led the home Wolfpack in scoring with 16 points on 6 of 11 shooting.

There is little time to change things for the Saturday rematch, and after the game Mike Bradbury said he would use most the practice time they have to work on the Lobo’s execution, not so much to put new things in for Saturday or focus on what Nevada did.  Game time Saturday is 2 PM Mountain time.