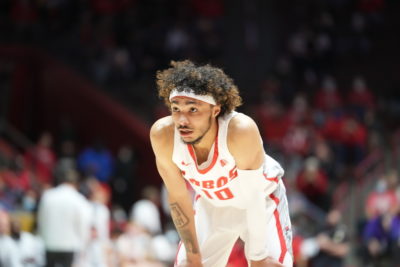 Jaelen House took off with a career-high 42 points as New Mexico picked up a 91-77 win against Air Force on Saturday night.

Air Force (10-11, 3-7 MW) is a top 25 defensive team, but the Lobos started out strong and led by as many as 17 points in the first period. The Falcons kept trying to come back, but UNM entered halftime with a 43-30 lead after a buzzer-beater three-pointer by House.

"It's his House on the road!" Definitely watch this on repeat from @jaelenhouse10!#GoLobos | #WeAreNM pic.twitter.com/VkhHD35W3B

The Falcons have had close results with the top teams in the conference this season, and they showed more fight in the second half when they cut the deficit to only three-points with 13:26 still on the clock. The Lobos soon pushed back with an 8-0 run to take a 59-48 lead. Although the Falcons weren’t giving up easily, the Lobo offense — more specifically, House — was on fire.

House scored 28 points in the second period to complete his 42 points for the night. Before Saturday, his career-high was 31 points against NMSU. As a whole, the Lobos shot at 58.9% from the field and went 8-of-16 from beyond the arc (with House making four of those three-pointers).

“We had a moment there in the second half where we were terrific offensively,” said New Mexico head coach Richard Pitino.”We need to learn how to play with a lead, which we aren’t used to, but any road win right now is great for our guys.”

This was the Lobos’ first conference road win of the season. New Mexico is now 9-14 overall and 2-8 in the Mountain West.

Next up, the Lobos host Northern New Mexico on Friday Feb. 11 for a non-conference game.