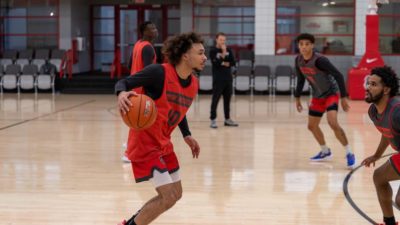 “In a good way. His voice booms. He’s got a very confident opinion,” the coach said.

It’s good for a point guard to be vocal, and this has never really been an issue for House. He recently started his junior year at the University of New Mexico, but House said his personality has remained more or less the same from when he was a kid, except now he is slightly calmer.

“I was very hyper, kind of what I am now,” he said. “But now I’m toned down a lot from what I was before. I was a wild little kid. I was full of energy all the time.”

House also prides himself in having a good sense of humor. He insists that he is the funniest guy in this year’s Lobo men’s basketball roster. Pitino couldn’t 100% confirm this, but he did admit House makes him laugh. The coach said House doesn’t take himself too seriously and has “a great disposition about him” that gets other guys to pay attention.

The 6’0 guard said some people see him off the basketball court and just stare, probably thinking he might not want to talk to anybody. On the contrary, House said he is not bigger than anyone and always welcomes a good conversation. The best way he could describe himself was by quoting Kawhi Leonard’s answer from the 2018 Toronto Raptors media day.

“I’m a fun guy,” he said with a straight face before laughing and admitting he couldn’t do the famous laugh.

Before bringing that energy to New Mexico, House spent two seasons at Arizona State, the same school in which his father, Eddie House, left his mark by becoming the all-time leading scorer. Eddie House then went on to spend 11 seasons in the NBA and was part of the Boston Celtics 2008 NBA championship team.

Jaelen House said one of his favorite memories as a kid was after that championship game, just running down to the court to be with his dad after the final buzzard went off. He remembers being around all the players in the locker room and deciding that he wanted to be achieve that some day.

“House, you had a good shot and you gave it up for a great shot. Good job.” pic.twitter.com/4e9YKzdIHS

House started playing basketball when he was around five or six years old. He tried football in middle school but it didn’t take long for him to realize that he didn’t really like it. Basketball was the only sport for him. Other members of his family played, including his uncle, Mike Bibby, and his grandpa, Henry Bibby.

Growing up, House had enough basketball players around to look up to, but he said the person that has had the biggest impact in his life is his grandmother, Virginia. During his time playing AAU, House often went on trips with her instead of with his parents.

“My grandma, she is so righteous. She is the sweetest lady ever,” he said. “I love her to death. She is a great example of how to live your life. Instead of a mama’s boy, I’m a grandma’s boy.”

House’s life revolved around basketball from an early age, and even said he feels he was “born for it.” He spends a lot of his free time working out at the gym, but House said he also likes to spend some of his down time playing video games. His favorite right now is Tom Clancy’s Rainbow Six Siege.

Another one of his hobbies is fashion. House said his goal is to be in the NBA, but if he had to pick a different career he would definitely be a fashion designer. Virgil and Warren Lotas are two designers he has been interested in lately. He said it’s too soon to tell which of his teammates has the best style, but that he looks forward to checking out their outfits throughout the season.

Behind his energetic and fun personality, Pitino said House also has a high basketball IQ and willingness to learn.

“You can talk to him, you can coach him. He doesn’t care about being coached hard,” Pitino said. “He has been an absolute joy to coach. He is one of those players who is going to push you as a coach.”

Pitino described him as a dynamic player and said he has some “really good intangibles.” House can help on both sides of the ball, and he’s currently working on improving his touch, as well as picking his spots and learning Pitino’s system.

House said his goal is to get to the next level of basketball, and that to achieve this he just needs to focus on getting better each day. He likes his team and is glad to be a Lobo, although he admitted that when Pitino first approached him he didn’t know much about New Mexico.

After doing some research with his dad, House said he got excited about what he could expect from the culture and fanbase.

“I want to be around something like that, where the fans are there supporting me,” House said. “Coach was hitting on that this is a great place to be, the fans always pack it out and we have a chance to do something well this year.”