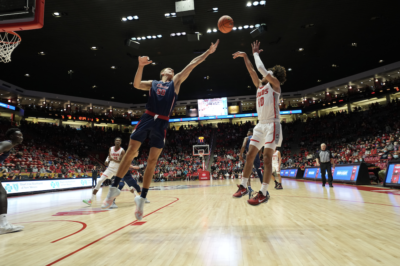 The Lobos took a while to shake off the nerves and didn’t score until almost three minutes into the game. They got going after this and went on an 8-0 run to take a 10-6 lead five minutes into the first half. FAU didn’t stay too far behind, in fact, the teams were pretty even for most of the night. By halftime, New Mexico held a slight 43-41 advantage.

Not a huge lead, but the last bucket of the first period gave The Pit crowd more energy and helped carry momentum over to the second half. New Mexico point guard Jalen House caused an FAU defender to lose balance and then he attempted a three-point shot. This shot didn’t go in, but forward Jay-Allen Tovar was there to grab the rebound and score.

This second period opened with House getting a steal and then hitting a three-pointer. Shortly after, the Lobos scored again with a shot from beyond the arc from Gethro Muscadin. The Owls went 0-5 from three-point range during the first 20 minutes, but they picked up eight three-pointers in the second half. New Mexico finished with 12 total, but eight of those were also in the second period.

New Mexico and FAU were tied with 69 points each halfway through the second half, but with seven minutes left in the game, the home team had found an 80-71 lead and had five Lobos in double digits. New Mexico’s largest lead of 16 points came with 2:41 remaining.

The night ended with House leading all scorer with 30 points, three rebounds, six assists and two steals. Former Lobo Kendall Williams, who used to wear the No. 10 jersey, commented after the game that he liked the new No. 10’s energy, leadership and skill set.

“I think he is going to be a Lobo favorite, I really do,” said Pitino. “I mean, he plays so hard, he plays with such confidence and energy. I wouldn’t be surprised if he is going to get a lot of standing ovations.”

Can’t say it enough, keep an eye on the New Mexico point guard this season. pic.twitter.com/wHqGnmmWpW

Allen-Tovar contributed with 18 points and also led the team with eight rebounds. The team only collected 25 total rebounds all night, so that will certainly be an area that needs improvement.

Muscadin also got 18 points. He did not participate on the team’s preseason exhibition game because of a suspension from the team due to attitude, but the 6’10 forward got that lifted just in time for the season opener. An announced attendance of 8,553 was there to finally see his athleticism in action. Pitino said the crowd certainly gave his team a little more spark.

“To get that type of crowd, to get that type of energy, it fueled us tonight, especially in the second half,” the coach said. We know what this team means to this community, and the more nights we can have like this, we can get back to having fun again.”

Gethro Muscadin with the dunk.

Also, I really missed the sound of The Pit. Glad fans are back! pic.twitter.com/ep3TVV3zQw

The other two Lobos in double digits were Jamal Mashburn Jr. with 14 points and KJ Jenkins with 10 points. New Mexico as a whole shot at 53.0% from the field and 52.5% from three-point range. There is no doubt the Lobos have talented guards and that the offense could be a strong area this season. But defense is something Pitino has admitted still needs work. The bigs on the team are still lacking experience, so the guards will have to do more to help them out.

With Wednesday’s result, the Lobos start the season 1-0, which makes it New Mexico’s 19th straight season opener win. Up next, the Lobos hit the road to take on Colorado on Saturday afternoon.