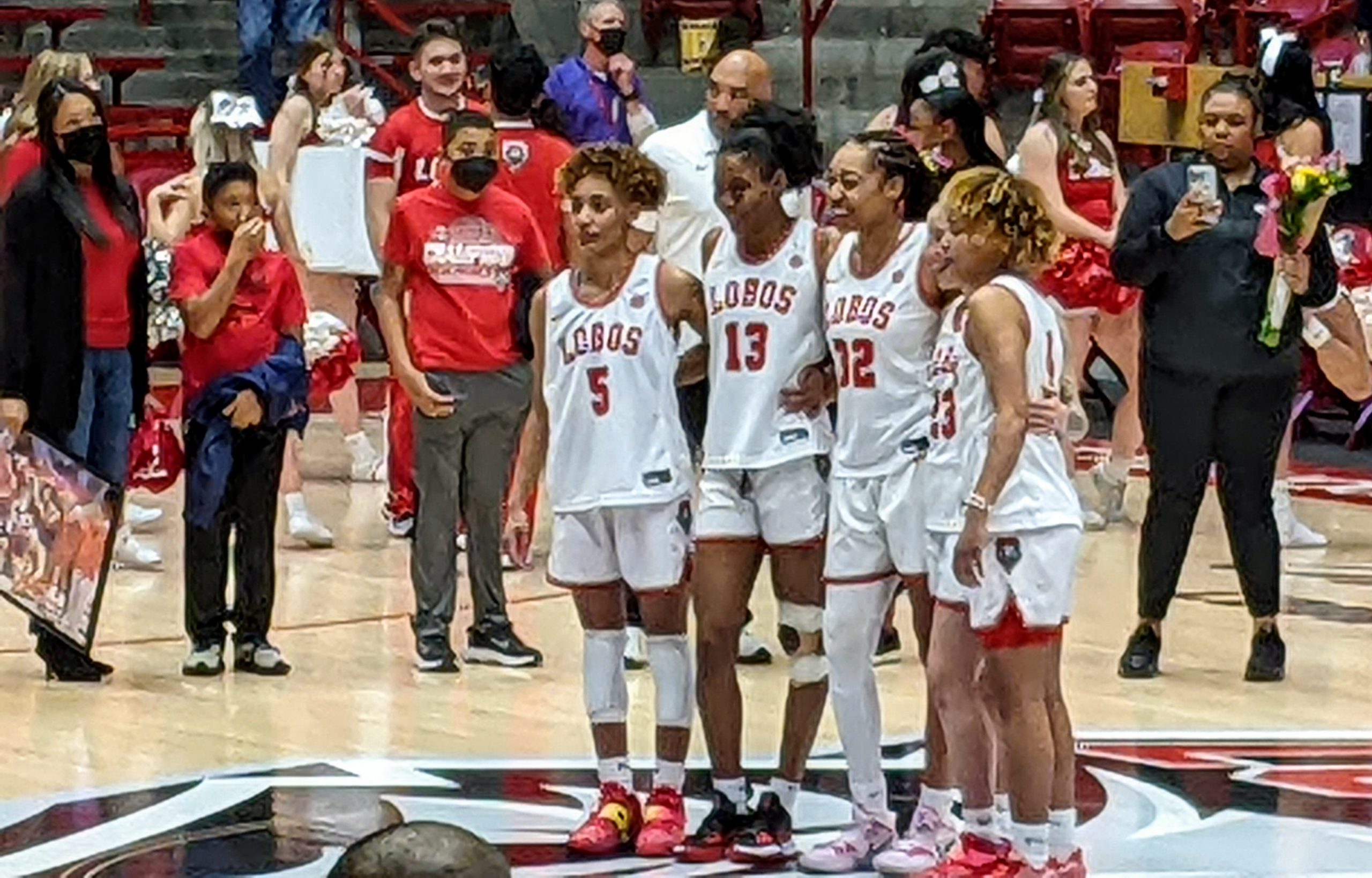 The past few years we have been fortunate to have these preview articles by someone who is far more knowledgeable about MWC WBB than most of us–and I would argue, than many of the media who cover teams not located in Albuquerque.  Here is his article for the upcoming season that unofficially starts with tomorrow’s 10 AM scrimmage in the Pit.  Enjoy.  And feel free to agree or take objections.

The Mountain West has been a very competitive league from top to bottom the past few years. But on the national level, UNLV, the defending champion was the only team to finish in the Top 75 last year. With so much talent returning, they appear to be putting some distance between themselves and the rest of the conference.

Their biggest competition will likely come from San Diego State who has added several experienced transfers to a veteran team that returns all five starters. New Mexico, Wyoming, and Colorado State each lost two key starters. But they have all added fresh talent to remain in contention.

After a couple of dismal rebuilding years, Boise State is poised to rejoin the elite teams if their outstanding freshman class quickly adjusts to the college game.

Last year’s 4th and 5th seeds, Nevada and Air Force, each have major holes to fill and could be trending downward into the bottom half of the league.

Last year UNLV won the regular season championship and also won their first MWC tournament. They return all of the key players from that team except for 6-3 Khayla Rooks. In addition, they have added a grad transfer from Nebraska, Ashley Scoggin, who as a starter made 42% of her 3-pointers. The Rebels are led by MWC Player of the Year, Desi-Rae Young, and point guard Essence Booker. They are the odds-on favorite to repeat their championship year. But the preseason favorite hasn’t won the title for quite a while in the competitive Mountain West. This year the target will be on UNLV’s back.

SDSU returns four starters, including all-conference guard, Sophia Ramos, and point guard, Asia Avinger. But they haven’t had a winning season in nine years under Coach Terry-Hutson. They appear to be pulling out all the stops to end that streak by adding several grad transfers, making them one of the oldest teams in the country. They are as talented as anyone in the conference. But they consistently fall short of expectations. Is this the year they finally reach their promise? For six super seniors it is the last chance.

Last year a late turnover and last-second shot by Wyoming kept New Mexico from sharing the regular season title with UNLV. But lack of depth took its toll as the season progressed. The Lobos must replace two all-conference players, Jaedyn de la Cerda and Antonia Anderson. All-conference UNLV transfer, Nia Johnson, and all-freshman, Paula Reus, should be able to absorb some of that loss. But to contend, the Lobos must get more production from their rather inexperienced bench.

First-year coach, Heather Ezell, inherits the 3rd-seeded Wyoming team from retiring Coach Gerald Mattinson. She lost leading scorer, McKinley Bradshaw, and starter Alba Sanchez-Ramos; but welcomes back super seniors Tommi Olson and Quinn Weidemann. MWC Freshman of the Year, 6’4″ Allyson Fertig, can be a force in the paint. Two potential starters, Ola Ustowska and transfer Malene Pedersen, are recovering from major injuries. Their health may determine whether or not the Cowgirls have enough talent to compete for the title. The bench is deep.

Colorado State made a run to the finals of the MWC tournament after finishing a rather disappointing 6th place during the regular season. They return all-conference point guard, McKenna Hofschild. But two key starters, MWC Newcomer of the Year, Upe Atosu, and center Karly Murphy are gone. Still, the Rams have picked up five transfers to fill the void and strengthen their bench. Post depth is a concern after Sydney Mech and Cali Clark. However, with several tall guards and forwards, the Rams can play four or five out if necessary.

Three years ago, Boise State was the top program in the MWC with four straight appearances in the NCAA tournament. But after finishing a disappointing 10th in conference with 21 losses, the Broncos are looking for a reason to be hopeful. The place to start is the return of a strong front line of posts who are improving as they gain experience. If their four highly-rated freshman guards can alleviate the shooting woes of the past two seasons, the Broncos could surprise a lot of people this year.

Last year Nevada tied for 3rd in the MWC. But with only three of their top eight players returning, the Wolfpack will be hard-pressed to stay in the top half of the conference. The Wolfpack does have some size inside with 6’3″ Megan Ormiston returning from injury to join starting forward Lexie Givens and 6’3″ Natalie Lathrop. And they return a defensive stopper, Alyssa Jimenez, and an offensive spark plug, Audrey Roden. Hampton transfer, Victoria Davis, will likely complete the starting lineup at point guard. The biggest question is whether or not Coach Levins has a strong enough bench to apply the defensive pressure that is her trademark.

The post-Cavinder era begins at Fresno. The twins have moved on to a bigger stage in Miami. And center Wytolla Motta is also gone, leaving a big hole in the middle. The bulldogs will try to fill that hole with two experienced forwards, Imani Lacy and Amaya West (both transfers from Nevada). Coach Jaime White has signed a boatload of international guards. But the only ones with much D1 experience are Amiee Book and Yanina Todorova who missed last season with an injury. The rest of the squad is rather young and inexperienced. Unless there are a couple of surprises on the roster, Fresno won’t likely improve their #8 seed.

Air Force had a record-breaking season in 2022 that concluded with the program’s first-ever post-season appearance (and win). One carryover is Coach of the Year, Chris Gobrecht, who will have her team playing relentless defense. Unfortunately, the Falcons have much to replace in all-conference Riley Snyder, Defensive Player of the Year Cierra Winters, and rebounding leader Haley Jones. Senior Kamri Heath is capable of taking on more of a scoring role and Jo Huntimer is a steady floor general. Still, it will require some outstanding freshmen to keep the Falcons in the upper half of the league. One to keep an eye on is 6’2″ Faith Shelton.

Utah State faces a total rebuild after only two players returned from last year’s team. Once again they signed several transfers to keep the program from falling off the map. Several are double digit scorers from smaller schools. Only time will tell how competitive they can be in the conference.

San Jose State is in a total rebuild with first-time head coach April Phillips (assistant most recently at Texas, Cal, and Arizona). The bad news is that the top seven players are gone. The good news is that they weren’t that great, anyway. Ellie Boni returns from a season cut short by injury. She will be joined in the back court by transfer Jada Holland, a former WAC Freshman of the Year. The other starters will likely be transfers, including a couple of little-used posts from the PAC-12, Marisa Davis-Jones (WA) and Samaj Smith (AZ). Anything higher than 11th place would be an achievement.