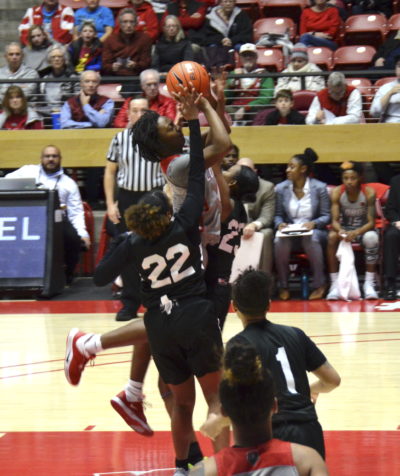 All photos by Isabel Gonzalez

Starting with their five game road trip last month, the Lobo women are in the middle of a twelve game stretch where almost every game is against a rival (NMSU, UTEP) or a team that has the potential to play in a post season tournament. The lone exception was tonight’s game vs Northern New Mexico. This was not a game that was supposed to age the coaching staff with worry, and it did not. The Lobos scored the first 11 points, had a nineteen point cushion in the first seven and a half minutes, and never looked back. The final score was 92-44 Lobos, but in reality the final numbers were not the important part.

This was an opportunity for freshmen Autumn Watts, Andriana Avant, and Azaria Robinson to get their first substantial minutes. Autumn had played 10 minutes in the first nine games combined, and played 25 tonight. Andriana had played one minute, and tonight had 17 more. Azaria’s total going into the NNM game was one, and added a dozen this game. All of them showed some skills, but the award for best performance of the night by a freshman clearly went to Autum. She had 17 points on 7 of 12 shooting and led the Lobos with 8 rebounds.

Azaria was also effective with 5 rebounds and a pair of steals and assists in her floor time. 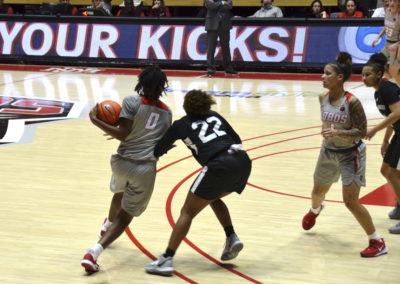 The fourth freshman, Corina Carter, had been getting more minutes even before tonight, but had one of her best
games as well:  a team leading 6 assists, only one turn over, and several of the assists were of the highlight variety. The passing was unselfish all night with three, four, and at least once seven passes to get an open shot. Seven players had assists, and the team finished with 23 assists on 35 baskets.

Among the other players, Shai and Jordan were bad mismatches for NNM all night. They overpowered and out quicked the visitors on their way to extremely efficient nights. Shai hit 9 of 11 shots to score a team high 18 points in 14 minutes. Jordan was 6 of 9 for 17 points, also in 14 minutes.

Destiny Wilkerson led NNM with 19 points on 5 of 10 shooting, as well as in assists and steals. She played 37 minutes and two other starters played 36+ (Chris’Alee Patterson and Haley Evans). But the minutes and pace took their toll as the two combined for 2 of 27 shooting, with the miss distances getting larger as the game went on. 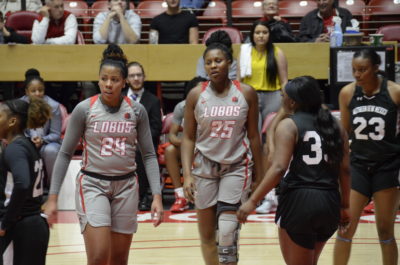 The other value of tonight’s game was a chance to try some different things. There were times with three posts on the court together as AT played some on a wing, and there were a few minutes of zone, as Mike Bradbury said afterwards, “it was practice in case we need it sometime”.

With this game in the books the Lobos are 7-3 heading into another tough stretch. They play Arizona State on the road Saturday, then four home games in five days next week, starting with NMSU visiting the Pit. 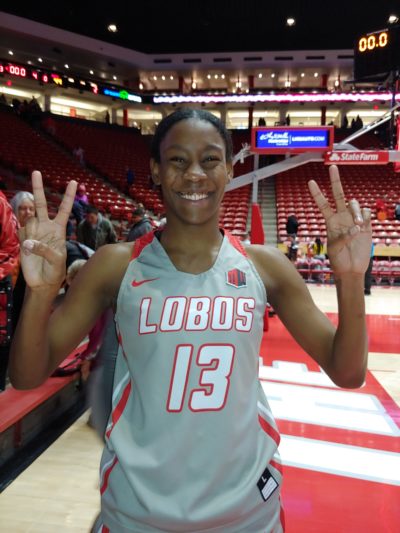 –Every Lobo played at least 12 minutes, and with five games in seven days coming up, all eleven will likely be needed