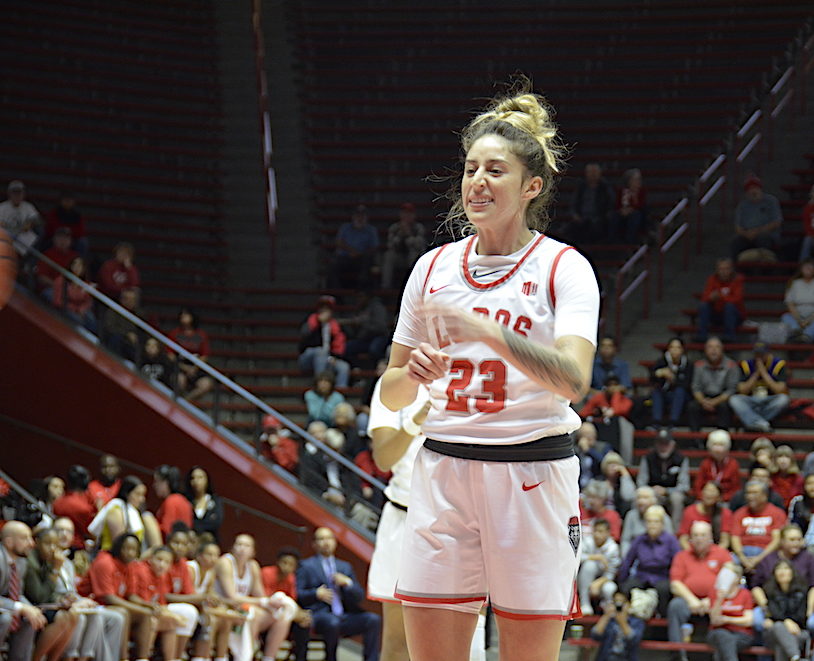 First road game of the season

NMSU has not started the season well, losing to UC Riverside by 2, and falling late to UTEP after the Aggies led with three minutes to go. Their only win has been against Denver.
In the past three seasons NMSU has been largely a two-person attack, with now-graduated Brooke Salas and now-Senior Gia Pack accounting for half the team’s offense last season. This year, 5’8” RS-Jr Aaliyah Prince has replaced Salas in the lead duo. Prince is averaging 22 ppg, Pack 18 ppg, and the rest of the team 24. Historically the Aggies have given the Lobos a lot of trouble at Las Cruces, even when they didn’t have their best teams, though last season the Lobos won 75-50. Pack in particular has had some big games vs UNM, including 26 & 7 last year in the Pit, and games of 33 & 5 and 18 & 11 the season before. This season Pack has been the primary three point threat with 8 of the 13 the team has made. Besides being second in scoring, she leads the team with 8.7 rebounds per game.
Prince was a sub last year, but this season is starting, playing 30 min a game, and leading the team in scoring, steals, and free throws (both attempted and made). 6’4” grad transfer Micayla Buckner who played previously at Baylor, Collin College, and North Texas. She is second on the team in rebounds while playing 17 min a game.
During the week the Lobos worked on attacking the NMSU pressure defense, but also on being aware of the key Aggie scorers. No inside info, but one would expect AT will get a lot of time guarding Pack, and Ahlise will match up against Prince.
Defensively NMSU is aggressive, and gets a lot of steals, and protects the ball reasonably well (15.7 TOs per game). One of the keys will be how many TOs the Lobos can cause. So far Lobo opponents have been turning it over 27 times a game, and this has been vital to the three UNM wins. If UNM cannot turn NMSU over it will not be a good omen.
The other key is rebounding. Both teams have struggled, and both are being outrebounded by more than five a game. Both teams rely upon quickness more than height to rebound, and in quickness-on-quickness, it is effort and footwork that will likely win this. If the Lobos can not outrebound the Aggies it could be a long and disappointing day.