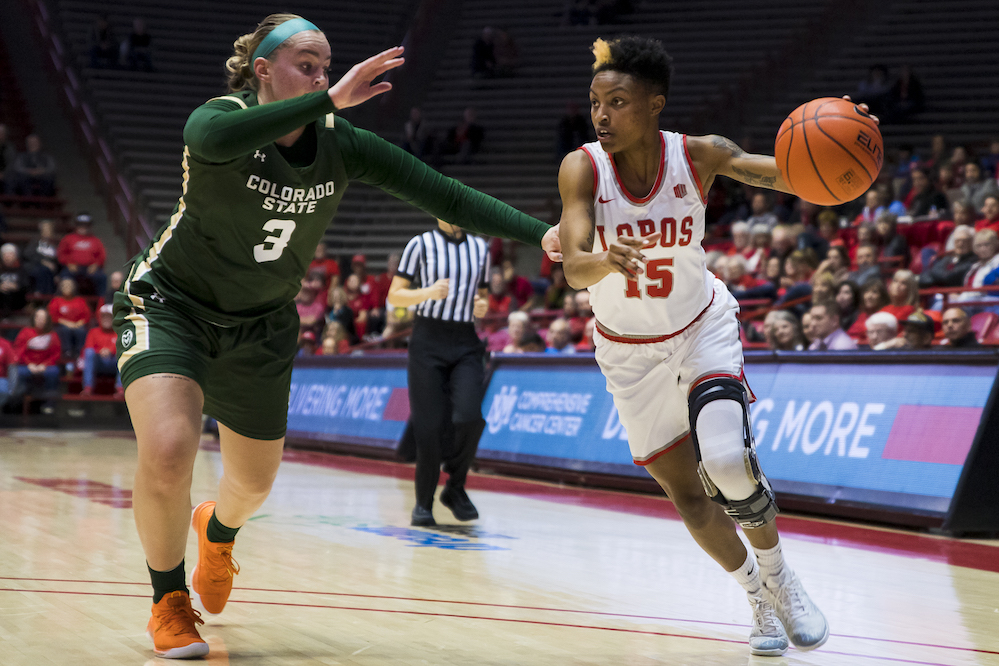 From December 18th through last Saturday the Lobo women went almost a month without winning. Tonight they rode their two seniors to a second straight win. Aisia Robertson had 25 points on 16 shots to go with 7 rebounds and 7 assists, while Jordan Hosey had 14 points on only 7 shots, and a game high 15 rebounds.

The game was a three point barrage by both teams, though with differing results at different stages. The Rams started off hot, passing the ball around the perimeter to get open three point shot after open three point shot. They were up six points at the first time out, and had hit 4 of nine in the first quarter. Meanwhile the Lobos got three early triples from Aisia, but otherwise kept passing the ball inside for most their shots. The shots were distributed, but many rimmed out. By the end of the quarter UNM had matched the Rams with four made threes, and CSU had gone cold, missing all eight of their two point baskets. The Lobos took a one point lead after 10 minutes.=

In the second quarter, CSU again started out quickly, again fueled by open shots against the Lobo zone, coupled with an uncharacteristic Lobo deficit in turnovers. An 11-0 Ram run put them up by 8 points, 31-23, and the Rams were 5 for 7 on threes in the quarter.

At that point the Lobos switched to a man-man defense. CSU struggled with the change, and only hit one basket in seven tries over the last five minutes of the half. Meanwhile Jordan started to dominate the boards and Aisia added four points as UNM ate away at the lead. When halftime arrived, the Lobos were down only one, 33-32. UNM only shot 31% overall from the field in the quarter, and the Rams were 15 points ahead on made threes, but they used other ways of keeping it close. UNM attacked the basket more and had a 12-3 advantage in fouls called, and an 8-2 advantage in free throws made. And in one of the few games this season, they had an edge in rebounds. 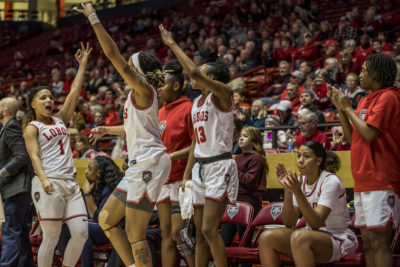 New Mexico’s largest lead of the game was 58-44 after the Lobos went on a 17-2 run. Michael Sandoval/The Lair

The opening of the second half was quite different. The Lobos abandoned the inside game and took nothing but long distance shots for the first five minutes, making 5 of 8. That fueled a 9-0 Lobo run, and put them up 47-40 at the media time out. Tori Williams and Annie Brady were 6 of 8 on threes at that point, keeping CSU in range of UNM, but the rest of the Rams were only 6 of 27 overall. The crowd was getting more into it as the Lobos kept forcing turnovers and stopped some of their own unforced ones. By the end of the 3rd the Lobo lead was 14, led by Aisia’s 20 points (on 6 of 10 shooting) and a quiet 13 from Ahlise (4 of 7). Together they more than made up for Williams & Brady, who were held scoreless in the last five minutes of the quarter. At this point the two teams had combined for 51 three point shots, and only 44 two point shots.

The Rams came out hot again in the 4th, and quickly cut the lead down to 8 points, and the crowd—if not the players—were not feeling as comfortable. A slicing drive by Ahlise stopped the 6-0 Ram run, and from there the Lobos started to burn clock and never let CSU back in range. In the last quarter Jordan had six points and four rebounds, and Aisia had five points and a pair of assists. The final was 73-62 UNM, and the Lobos improved their record to 11-8, with another home game vs UNLV on Saturday. There will be a free clinic from noon to 1 PM, with tip off at 2 PM.

Miscellaneous points: Nine Lobos played, and all nine had 10+ minutes. Jayla played only one minute in the second half, and looked a little off her game when she was in there in the first half. It was clearly Aisia’s best game of the season, both statistically, but also in her movement—she was moving more smoothly and jumping more naturally. Jordan had her 3rd double-double in the last four games. The Lobos ran more, and more effectively throughout the game, and had a 12-3 lead in fast break points.