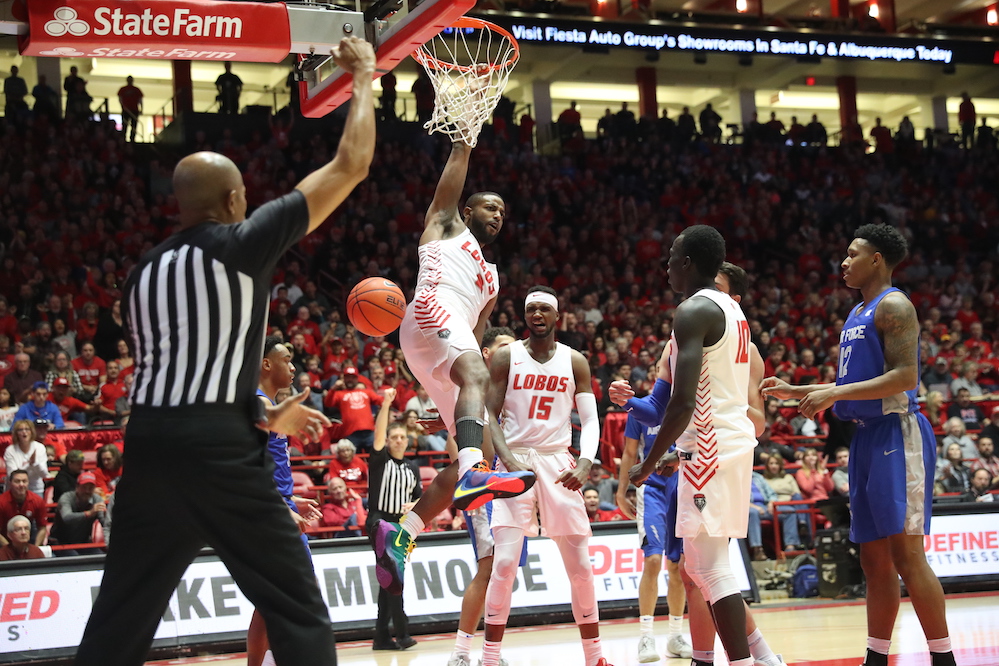 The University of New Mexico men’s basketball team is 12-0 at The Pit after defeating the Air Force Falcons 84-78 on Saturday afternoon. This had not happened for the Lobos since the 2005-06 season.

New Mexico improved to a 15-3 overall record and 4-1 in the Mountain West conference. Meanwhile, the Falcons dropped to 8-9, 2-3 MW.

The winning offense saw five players in double digits with JaQuan Lyle leading with 20 points. Corey Manigault followed closely with 18 points. He helped the Lobos reach a 37-34 lead at halftime thanks to his 11 points, five rebounds and three assists during the first 20 minute period.

Air Force proved to be a team that wouldn’t back down, keeping the game close and never giving the Lobos much room for comfort. About a minute and a half into the second half the away team had tied the score at 39-39.

Almost halfway through the period New Mexico found a double-digit lead, but with 48 seconds left, Scottie Lavelle hit a jumper that put the Falcons only three points away from the Lobos. Lavelle, one of four Air Force players to score in double figures, finished the game leading all scorers with 26 points.

New Mexico head coach Paul Weir gave credit to the opponent for being tough, but specially to his own players for continuing to figure out ways to win close games.

“I can’t take credit. These guys in those moments have made plays all year long,” Weir said. “When the game has kind of been in the balance, we just seem to make big plays. I think it’s a testament to that.”

Vance Jackson @VanceJackson1 with the three. Will it be one of those games?? 👀🔥 pic.twitter.com/9yj4Yoyd3I

Weir had said his team would have to be careful with Air Force when it came to three-pointers. The Falcons came into the game leading the conference in three-point percentages by shooting at 41.5%.

The Falcons did not shy away from threes, especially in the first period where 16 out of their 32 field goals came from beyond the arc. However, out of those 16 attempts only five went in. In the second period the Falcons were 3-for-12 from there.

The Lobos beat the Falcons 44-36 from the paint. This fits Weir’s defensive strategy that focuses on the Lobos forcing opponents to shoot from the outside instead of allowing them to go in the paint, as he said he is confident his players have the length to challenge threes.

Up next, New Mexico hits the road to take on Colorado State on Jan. 15 and UNLV on Jan. 18.