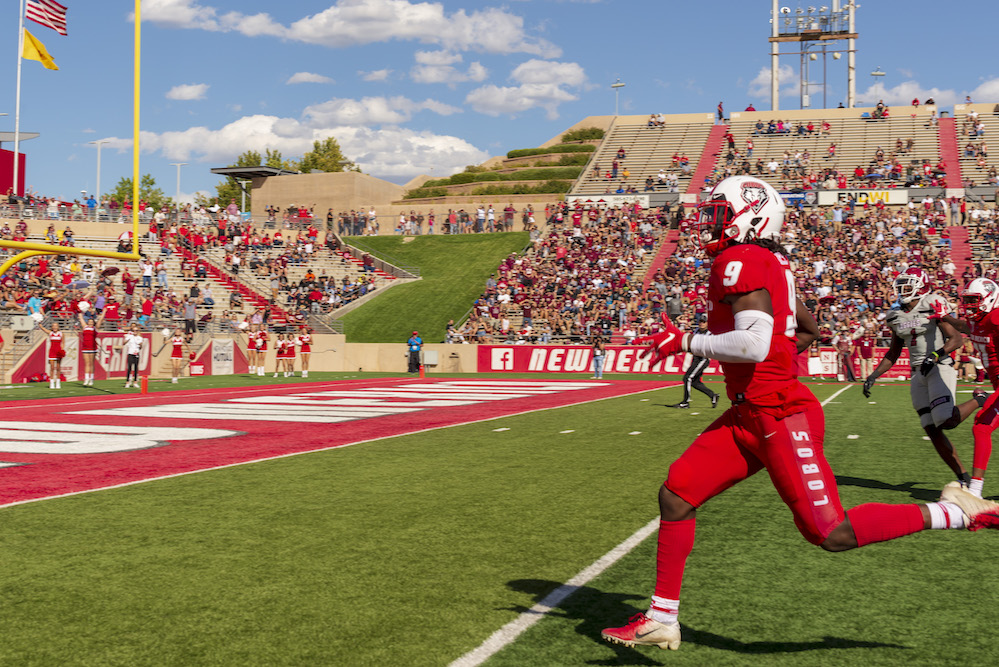 There was no lack of offense on Saturday as the New Mexico Lobos and the New Mexico State Aggies put up a total of 107 points during the 2019 Rio Grande Rivalry game. The Lobos finished on top with a 55-52 victory in Albuquerque and have now won back-to-back games against their in-state rivals.
It was not a bad football day for UNM quarterback Tevaka Tuioti, who has been dealing with the death of two family members and had to catch a flight to Los Angeles after the game. Tuioti made the best out of his first start of the season as he passed for 355 yards and three touchdowns, and rushed for 59 yards.  After the game, acting coach Saga Tuitele spoke highly of Tuioti, saying the redshirt sophomore managed to still be himself even with all the adversity he has had to face lately.
UNM got ahead early as Jerrick Reed II completed a 43-yard interception return. This was his first career start and his first career interception. Andrew Shelley’s kick was good. The 7-0 lead only lasted three minutes, with NMSU quarterback Josh Adkins recording a three-yard run. The redshirt sophomore accounted for six touchdowns throughout the day, three thrown and three rushed.
The teams continued going back and forth as defense wasn’t really there. By halftime, the score was tied at 31-31.
The home team was more efficient in the third quarter, putting up 17 points and only allowing the Aggies seven. The last touchdown of that period came from Cedric Patterson III, who recorded his first career touchdown by catching a 62-yard pass from Tuioti.

NMSU retaliated by only allowing the Lobos seven points in the last quarter, while scoring 14 points themselves. Unfortunately for them, those 14 points weren’t enough.
Both teams pushed hard for the victory but in the end it was UNM who pushed harder, literally. With about a minute and a half remaining, the Lobos got a game-clinching first down by pushing senior running back Ahmari Davis for 11 yards. That was just one of Davis’ accomplishments for the day. He also had two rushing touchdowns (four in total this season) a career-high 133 yards rushing.
The Aggies drop to a 0-4 record while the Lobos improve to 2-1. While returning to a winning record was good for the program, Tuitele said this was dedicated to head coach Bob Davie.
“This was for Davie and the Davie family,” Tuitele said. “It’s one game, but everything that family has been through, what he has been through in the last couple weeks, this was for them.”