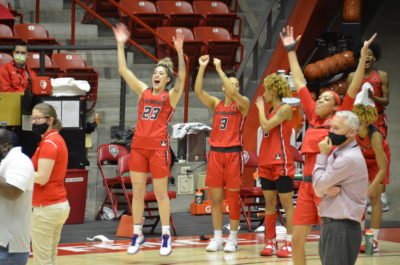 After sweeping the Colorado State Rams, the New Mexico Lobos lifted the Mountain West regular season title trophy and secured the No. 1 seed for the conference tournament next week.

Award were announced on Sunday and New Mexico was well represented. Three Lobos made it into the All-Conference Mountain West team: Jaedyn De La Cerda, Antonia Anderson and LaTascya Duff. Duff was also named Sixth Person of the Year. Shaiquel McGruder was named to the All-Defensive team, Ahlise Hurst got an Honorable Mention

New Mexico only played two games at home, and those were the last two games of the season which were must-win games in order to earn the conference title.

The first one was on Thursday. There were some ugly parts, but the Lobos pulled that win with a 68-55 result and celebrated senior night for De La Cerda and Anderson. The offense was a true team effort with five UNM players scoring in double digits. The next victory was on Friday with a 71-62 result. Junior Ahlise Hurst recorded 21 points while shooting at 50% from beyond the arc.

The Lobos haven’t been the top-seeded team since 2005, but they pulled it off in a season when they had a lot of extra challenges thrown at them. There was a lot of adversity, but head coach Mike Bradbury said it pushed the team to be better.

“In a weird way, it might have helped us,” he said. “Our team was more connected to each other this year than it’s ever been. We played hard, we played together.”

The cherry and silver shared the 2003-04 and 2004-05 regular season championships, but this was the first time UNM was the outright winner.

New Mexico finished the 2020-21 regular season with a 14-3 overall record and 11-3 MW record. Due to their No. 1 seeding, the Lobos will skip the first round and take on either the No. 8 San Diego State Aztecs or the No. 9 Air Force Falcons on Monday, March 8 at 1 pm MT.

BREAKING: The bracket is set for the 2021 Air Force Reserve Mountain West Women's Basketball Championship!@UNMLoboWBB is the top seed for the first time since 2005#AtThePeak | #MWWBB pic.twitter.com/OBgZqNDdG3

Player of the Year: Haley Cavinder, So., G, Fresno State

Newcomer of the Year: McKenna Hofschild, So., G, Colorado State