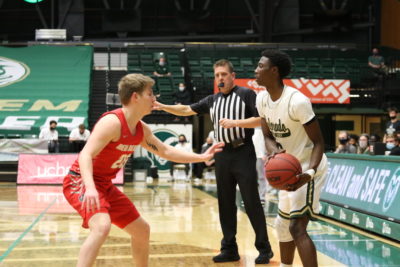 New Mexico wrapped up it’s regular season with an 87-73 loss to Colorado State on Wednesday night. The Lobos looked ready to move on and start their “new season” with the Mountain West conference tournament next week.

The team was shorthanded with only six scholarship players available and four walk-ons. Bayron Matos, Valdir Manuel, Rod Brown and Kurt Wegscheider decided not to make the trip.

“I’m giving certain players on our team some space to process what’s going on,” said head coach Paul Weir. “I’m hopeful that they will return again this season.”

Weir, who is leaving the program after the full season is over, entered the virtual press conference briefly before giving his seat to assistant coach Ralph Davis.

“I would really like my staff members to have the spotlight the rest of the way,” Weir said. “I’m blessed to have had an amazing group of people with me this season. I can’t tell you how lucky I am to have these guys by my side.”

Colorado State took over right away, but UNM fought enough to tie the game with 20 points halfway through the first period. This made the Rams fight even harder and go on an 11-0 run. By the end of the first half CSU found a 47-31 lead while shooting at 72.4% from the field. The Lobos didn’t catch up again.

There were not really any moments that truly looked like New Mexico could pull off the upset, but there were some positives that got the team excited. Walk-on Eloy Medina went 2-of-3 from beyond the arc, which became the first time the freshman scored a three-pointer as a Lobo. The four walk-ons combined for 40 points on Wednesday.

Freshmen walk on Eloy Medina with his first career three pointer! Lobos threatening with a 12-2 run to bring the score to 18-20.#GoLobos pic.twitter.com/cg4IxYTwyS

“He stayed patient, stayed humble, continued to work and allowed himself to work himself into the lineup,” said Davis. “Moving forward we’ll see more of him for sure.”

As usual, senior Makuach Maluach led the Lobo offense. He scored 20 points, which became his fourth straight 20+ point game and moved him into 17th in UNM scoring history. Sophomore point guard Jeremiah Francis was the only other Lobo to score in double digits. He registered 10 points for the second time this season.

When talking to the media after the game, Davis had a positive attitude and said the team was going to accept whatever happens in the MW tournament, but that they were not going to give up before even playing.

“It’s an opportunity nonetheless. It’s something that we are going to prepare for and do the best we can,” Davis said. “We are going in there trying to play as hard as we can… Our goal is to go out there, win the first game and go on from there.”

Loading...
Newer Post
Lobos Win Ugly 68-55 Over CSU, Move Back Into 1st With One Game Left
Older Post
Paul Weir and New Mexico agree to part ways at the end of the 2020-21 season