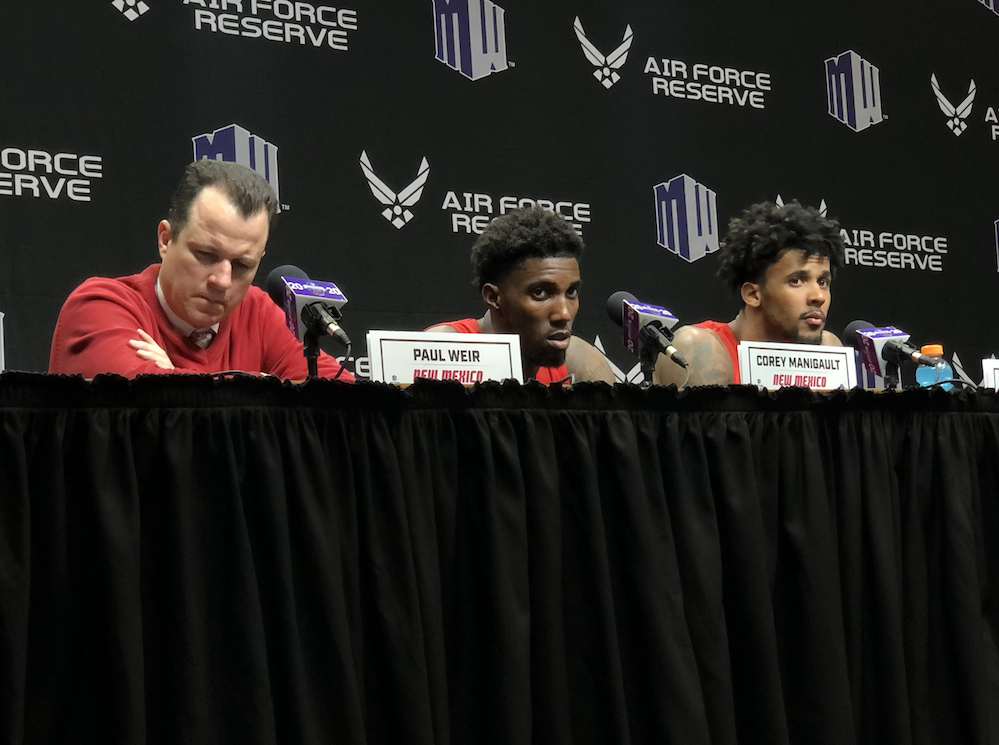 Lobos end season with loss to Utah State in quarterfinals

New Mexico head coach Paul Weir struggled to hold back tears after an emotional 75-70 loss to the Utah State Aggies.

The Lobos were so close to a ticket for the next round, but their season ended in the Mountain West Tournament quarterfinals for the second year in a row.

The Lobo offense started the game cold, but it became good enough to get the Lobos to a 33-33 tie at the break, with some help from the defense, of course.

Utah State found a lead early in the second half. But the Lobos caught up and started waking up the crowd. By the 9:41 mark, a strong sequence for New Mexico happened with a Keith McGee three-pointer, a steal by JaQuan Lyle and a layup by Kurt Wegscheider. This gave the Albuquerque team its largest lead of 11 points, 57-46.

New Mexico leads 47-43 with a second-chance layup by Kurt Wegscheider.

Lobos are asking the crowd to get louder. pic.twitter.com/twVWPteSyC

But the Aggies were not a no. 2 seed for nothing, they found their way back up. With 1:33 remaining, the scoreboard had an even score of 70-70.

Utah State hit a three-pointer and Vance Jackson tried to respond with one of his own but missed. A defensive rebound by the Aggies was followed by a UNM timeout. Then the Aggies’ Justin Bean made the last layup of the game.

Jackson tried another unsuccessful three. Corey Manigualt got a rebound but then he also missed a shot from beyond the arc.

Jackson blamed himself after the game.

Weir didn’t agree. He said his team played with heart and blamed the loss on his coaching abilities.

“I couldn’t coach us well enough to a victory. These guys players their hearts out.” pic.twitter.com/UdHInomnaY

“Credit to Utah State. They were really good. We kind of went back and forth between man and zone there late to stop Merrill, but I just, I couldn’t coach us well enough to a victory,” Weir said. “These guys played their hearts out. Unfortunately, I just couldn’t create enough defensive stops down the stretch for us to get the victory.”

New Mexico ended its 2019-20 season with a 19-14 overall record. The team was described as underrated during preseason, but during the actual season, the group had a lot of drama going on. Between injuries and suspensions, the Lobos looked very different at the end of the season.

“There is a lot that went on this year in many different levels. On the court, off the court, each of the individual players, maybe myself, and then all of us collectively with our different relationships,” Weir said. “I hope I’ve impressed upon them to keep a really good attitude in the face of adversity and just continue to work thorough it.”