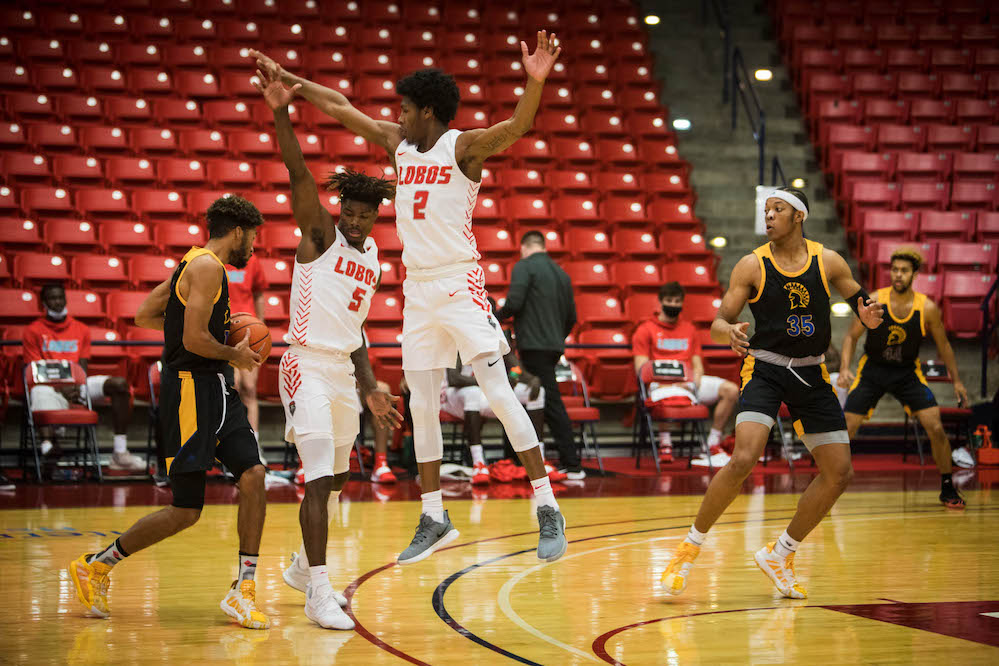 The New Mexico men’s basketball team picked up it’s first Mountain West Conference win with a 67-51 result against the San Jose State Spartans on Thursday afternoon. Head coach Paul Weir said the energy in the locker room was different from what he’s seen all season.

“It was probably the first really happy locker room we’ve had,” Weir said. “We’ve had some wins and it’s kind of been a pretty monotonous feel in there, but the guys were happy today. I’m happy they got to smile a little bit and have some enjoyment.”

Offense
The Lobos dominated in the paint 42-26 and never trailed against the Spartans. The first half saw New Mexico shoot at 36.1% but the team improved to 51.9% in the second period. New Mexico was up by as many as 19 points with two minutes remaining in the game.

Lobo senior Makauch Maluach led all scorers with 25 points on 10-of-14 shooting from the field. He was one point shy of his career high in scoring, but did register a career high in steals with four. Redshirt junior Rod Brown also scored in double figures with 15 points.

Point guard
Weir has talked several times about the need for a consistent point guard. On Thursday, the Lobos got some good minutes out of two players. Saquan Singleton was the starting point guard and stayed in that position for 27 minutes. The rest of the time went to Isaiah Marin.

Brown said Singleton has proven he can do a little bit of everything and has a basketball IQ that the Lobos need in order to be successful.

“He does bring a lot of energy, even in practice,” Brown said. “He plays the same way in games and practice so it’s like a really good mindset, he’s a really good leader for us. I just think a lot of guys look up to him.”

Extra gym time has helped
Dixie State has offered New Mexico more time in the gym than they were getting in their previous location in Texas. At St. George Utah the Lobos are able to get in the gym for more than just practices and games. Players are able to come in during their free time and work on their shots, which is something that they badly needed at the beginning of the season as they struggled with free throws.

Back to the 505
The state of New Mexico is now allowing the Lobos (as well as the New Mexico State Aggies) to practice at home. They’re not allowed to host games yet.

Players have shown excitement about being able to practice at The Pit and sleep in their own beds, but Weir said the team still has to travel to play games so he is not sure how much impact coming home for a few days will have on the team.

Could Keith McGee return?
With the team being able to return to Albuquerque, the question of whether or not senior Keith McGee could return has been asked a couple times. Weir didn’t have an answer yet, said that’s to be determined.

Lobos struggle to finish strong in loss to Fresno State
Feature: Drue Drinnon, sticking to Plan A
Nevada will be a tough challenge as the Wolf Pack looks for revenge
Men's Basketball 355