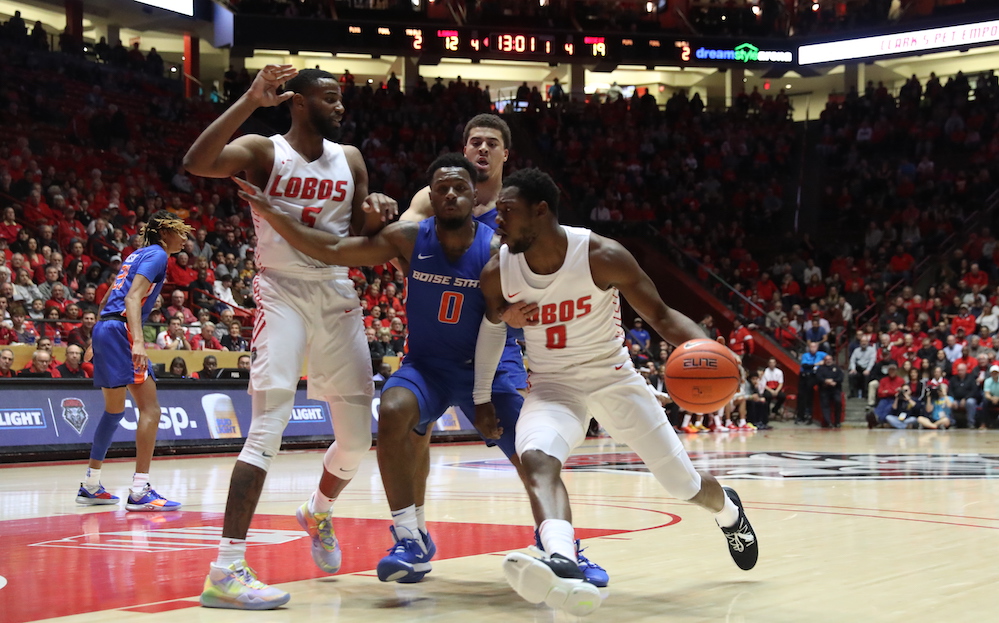 The New Mexico Lobos have a quick turnaround as they hit the road to take on the Wyoming Cowboys for a Saturday afternoon game.

This will be the second Mountain West game for both teams. New Mexico is 8-2 overall and 1-0 in the conference. Wyoming is currently 3-6 overall and 0-1 in the MW.

The Cowboys are on a three-game losing streak with their last result being an 86-77 loss to Air Force on Dec. 4. This was the most amount of points Wyoming has scored this season.

The Cowboys also saw a season-high 52% shooting from the field and season-high 14 three pointers. If they pull off those stats again, the Lobos at least already got some experience with that particular challenge.

Fourteen three-pointers was the same amount that the Boise State Broncos collected on Wednesday when New Mexico pulled off an 80-78 win.

The Lobos have taken a total of 171 attempts from beyond the arc this season. They have allowed opponents 284 attempts. This, Weir has explained, is part of New Mexico’s offensive plan to keep opponents from going in and forcing them to take threes.

Boise State shot at 50% from beyond the arc. During the postgame press conference head coach Paul Weir said that was not the stat he expected the Broncos to put up, but he was happy with the adjustment his team made throughout the game.

Hunter Maldonado is the only Wyoming player seeing double digits, averaging 15.8 point per game. The New Mexico offense goes a little deeper than that. Three Lobos are seeing double figures, JaQuan Lyle leading with 18.2 points per game, followed by Carlton Bragg and Makuach Maluach with 12.4 and 10.0 ppg respectively.

Wyoming head coach Allen Edwards said he thinks his team will find consistency in the offense eventually, but his main focus right now is to have a solid defense.

“This team, to put ourselves in position to win basketball games we’ll have to defend, rebound and take care of the basketball,” Edwards said. “Kudos to our offensive numbers, but it doesn’t mean much if the other team shoots it better.”

Meanwhile, Weir is thinking about his team’s energy. After a four-game stretch on the road, the coach said he could see his team lacking some energy even though they were still able to win at The Pit twice.

“My biggest concern with Wyoming is just our tight turnaround… tonight I thought Boise had more burst than us, especially at the start of the game,” Weir said on Wednesday night. “We just have to find a way to rally our energy to get through one last game for this stretch. Then hopefully kick back for a couple days and get some rest.”

Notes:
The Cowboys will be honoring all-time scoring leader Fennis Dembo with a jersey retirement on Saturday.