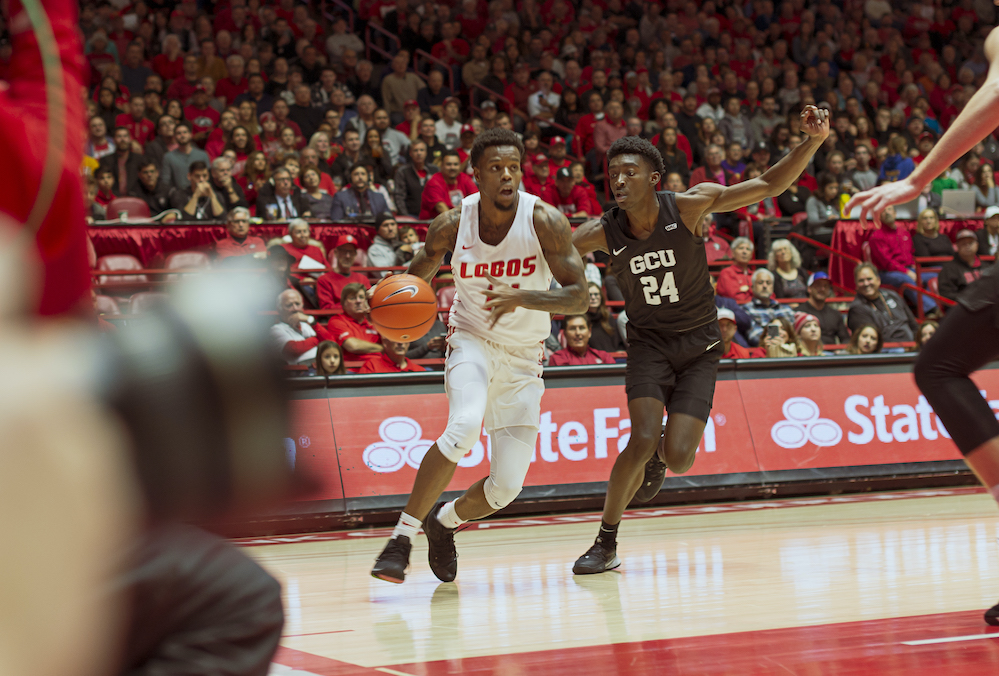 The New Mexico Lobos uncharacteristically became a three-pointer team during a 20-point win against Grand Canyon on Tuesday night.

Head coach Paul Weir was definitely ok with it.

The cherry and silver pulled a 91-71 victory by shooting at 55.4% from the field and 53.8% from beyond the arc. UNM averages six three-pointers per game, but on Tuesday the team registered 14.

The game started with both teams staying close to each other as one team scored and the other one would respond right away. But nine minutes into the first half, the Lobos had reached a double-digit lead at 20-10 thanks to a three-pointer by Carlton Bragg. By halftime, the home team led 37-31.

Weir and the Lobos are a team that usually try to keep opponents form going inside and pressure them into taking shots from beyond the arc. This time New Mexico was the team that had to take those shots.

“We were up and I thought the game would open up inside, it kind of did at the beginning of the second half,” Weir said. “Then I think they basically made us shoot threes. It’s not something we really like to do, but we were making them.”

Four three-pointers came from JaQuan Lyle, who led the team with 21 points. Also with four threes was Vante Hendrix, who had just become eligible to play on Tuesday.

Hendrix played about four minutes in the first period, but 18 minutes in total. He hit a three-pointer about eight minutes into the second half, and in the next New Mexico possession he set up for another one.

The fans got excited after the first one so they screamed “shoot it.” He did, and he made it.

This is the second three-pointer for Vante Hendrix (who just became eligible to play today). pic.twitter.com/CYTSGHKmYP

“What he showed tonight was well beyond my wildest expectation,” Weir said. “I talked to him a little bit today before shoot around about keeping low expectations, build slowly, but he had a little bit of a bigger impact than I anticipated.”

Overall, New Mexico held the lead for over 36 minutes. The largest margin was 22 points with under three minutes remaining.

Up next, the Lobos host Houston Baptist on Sunday at 12:30pm MT.