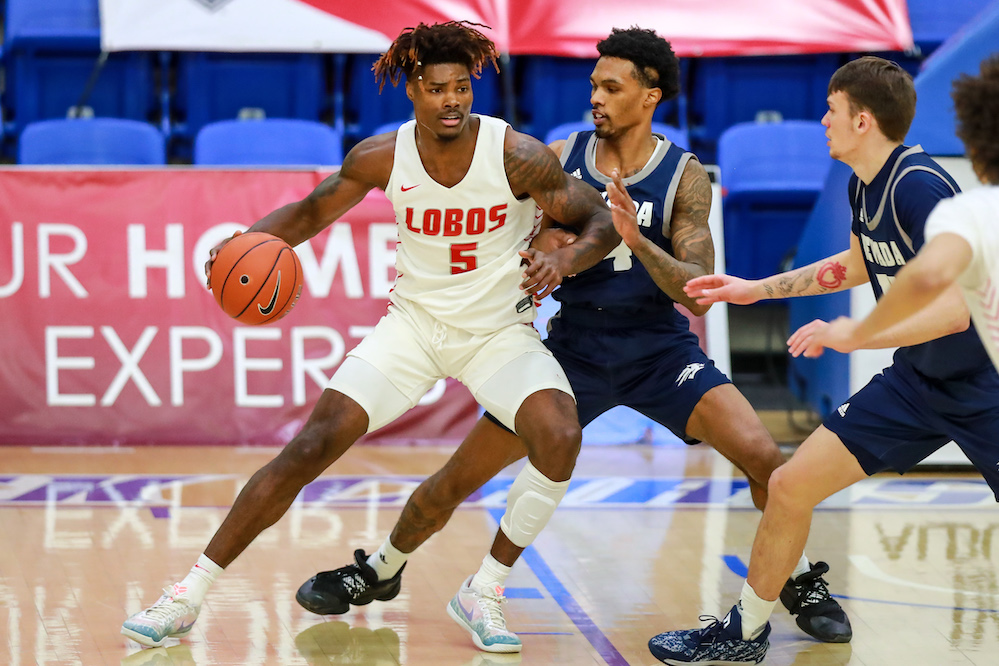 The New Mexico men’s basketball team got swept by the Nevada Wolf Pack during their second week of Mountain West play. The Lobos have dropped to a  3-4 overall record, 0-4 MW. The inexperienced group still has work to do, but there has been some improvement already.

Thursday: Nevada 68, New Mexico 54
The Lobos had a decent start during the first game while Nevada’s offense was cold and didn’t score a field goal in the first seven minutes. But the Wolf Pack eventually got going and finished the half with a double-digit lead thanks to a 23-8 run. UNM never quite recovered from that.

It wasn’t that Nevada was playing exceptionally well, but the Lobos only shot at 31.0% from the field. They also struggled form the free throw line, only making 15 of their 35 attempts.

Senior Makuach Maluach went 6-of-14, and also only made one of seven attempts from the charity stripe. He said shots sometimes go in and sometimes they don’t, but as a leader of the team he knows he can’t miss so many free throws. While accepting he has to do better, Maluach also kept a positive attitude.

“There is no room or time to feel sorry for ourselves. Just come back tomorrow and work hard,” he said after the game.

Saturday Nevada: 84, New Mexico 74
Maluach was right, the Lobos were too busy to feel bad. They had a lot of work to do in practice to fix issues on both the offense and defense.

“Just getting the offense, getting into our sets because when we get to our sets and we move the ball we look pretty good,” freshman Isaiah Marin said when asked what practices focused on before Saturday’s game. “Just staying in front, staying solid and playing full court defense to the best of our abilities.”

The Lobos closed out the first half better than they did on Thursday, they were only down by three as Nevada led 39-36. New Mexico stuck around for a while during the second period. With 13 minutes remaining, the Lobos were on a 14-0 run that help them take a 51-46 lead. Nevada called a timeout and then answered with a 6-0 run.

Isaiah Marin from the top of the key to force Nevada head coach Steve Alford to call timeout. Lobos up 51-46 with 13:12 to go in the second. #GoLobos pic.twitter.com/blXteYuY3Y

New Mexico kept fighting and went on another run to take a 70-69 lead with 4:47 left. The Lobos still lost by double digits but they looked better individually and as a team. Senior Keith McGee had only  registered one shot during the first game. On Saturday, McGee led the Lobos with 14 points and hit four successful shots from beyond the arc.

New Mexico finished the night shooting at 45% from the field. Free throws were still not ideal, as the Lobos shot at 65.5%.

“Hopefully we just continue running our sets. Get better everyday,” McGee said. “There’s going to be a major change. I promise you it’s coming.”