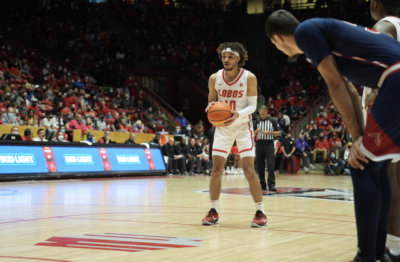 The New Mexico men’s basketball team picked up its first loss of the season during a road trip to Colorado on Saturday. The Lobos (1-1) have a chance at getting back to a winning record by taking advantage of a three-game homestand that starts on Monday when they host Grambling State.

The Lobos lost their road opener to the Buffaloes 87-76, but it was a three-point game with two minutes to go. Although New Mexico couldn’t quite pull off the win, the team showed a lot of fight and head coach Richard Pitino said they could use it as a learning opportunity.

“We are young and sometimes not handling adversity is part of that,” Pitino said after the game. “We just haven’t been through the wars together. If we learn from this, it could be very beneficial because there are guys who have not had big roles on teams who are now getting that chance.”

Upcoming games at The Pit (all of these games will be available on the Mountain West Network).