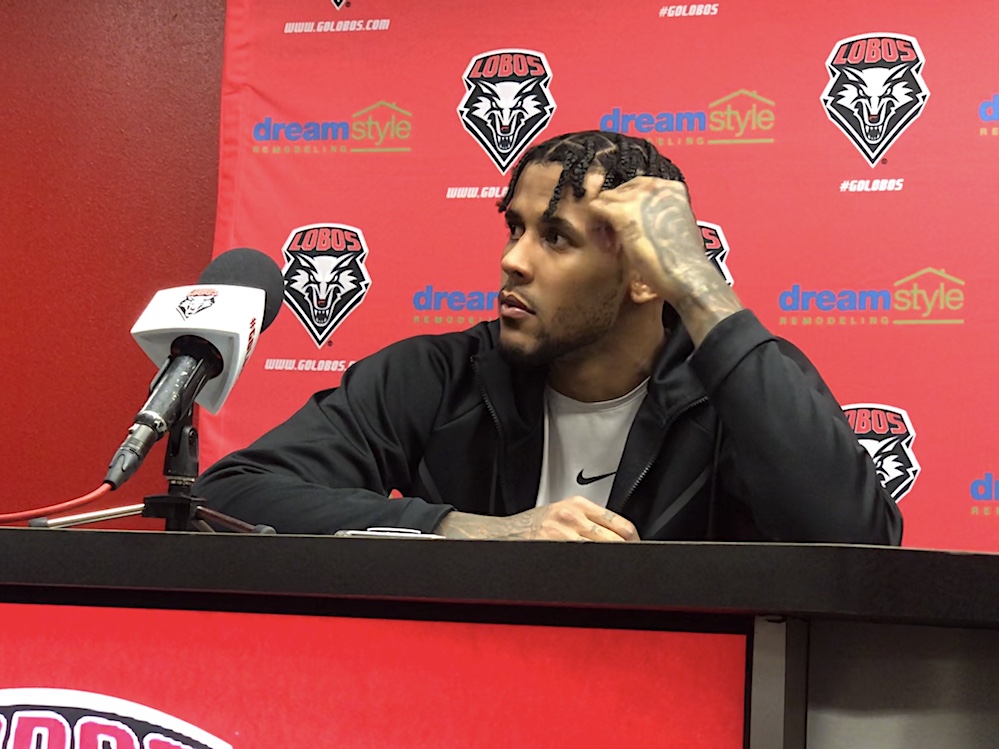 The Lobos were missing JJ Caldwell who is still suspended, Tavian Percy who came down with the flu and Keith McGee who left to New York to attend a family member’s funeral. But even without Lobo players missing, Fresno State was already expected to be an interesting matchup for New Mexico.

The Bulldogs came into the game as the MW team that attempts the most three-pointers. The Lobos are the opposite, being the team that attempts the least. Fresno State didn’t exactly go crazy with them on Wednesday, but the Lobos were able to show they won’t shy away from that type of game. New Mexico attempted 22 shots from beyond the arc and made nine of them. Six of those belonged to Jackson.

Does this mean New Mexico might start a new relationship with three-pointers? Not necessarily, but head coach Paul Weir did say he knew his wings were going to have to make some if they want to stay competitive, which is why the team spent the last week with more individualized workouts to help players improve their shots.

Earlier in the season Weir said that part of his team’s defensive strategy was to force opponents to take threes instead of getting inside. That could be a dangerous strategy when playing against teams that feel comfortable from beyond the arc, but the coach is not stressing too much about that.

“I think as long as we challenge them and we really utilize our length and our size, I still like our defense. We are not going to start changing things and giving up a lot of stuff around the rim,” he said. “Defensively it worked tonight…I think our scheme has won us a lot more games than it has lost us at the three-point line this year.”

Fresno State attempted 21 shots from beyond the arc but only made six. Three of those came during the first five minutes of the game. The Bulldogs had seen senior New Williams tie a program and MW record with 10 successful three-pointers during their previous game (a 79-64 victory over SJSU). Williams only made two on Wednesday.

During the postgame press conference, Weir said threes were a big part of the Fresno State scouting, and that the same is true for the Lobos’ upcoming opponent, the Air Force Falcons. The Falcons are currently leading the conference in three-point percentages by shooting around 41.5%.

While Jackson made six three-pointers on Wednesday, this was not exactly expected from him. The redshirt junior came into the 2019-20 campaign with high expectations from fans due to a strong postseason performance in 2019, but he did not start the current season too well.

After starting the season in a slump, Vance Jackson's recent resurgence as a contributor is something to keep an eye on as uncertainty continues to surround the Lobos' lineup. #GoLobos @DailyLoboSports pic.twitter.com/d1UbgqIkNf

“I wish I could’ve done it first half of the season. I know everybody had high expectations,” the player said.

After Wednesday night, Jackson said he was feeling like the sky is the limit.

His performance came at a good time, as redshirt senior Carlton Bragg, who just returned from a three-game suspension, struggled to find a good offensive rhythm and went 1-for-7 from the field. Bragg is the team’s second most consistent scorer behind Lyle, who picked up 14 points agains the Bulldogs.

Up next, New Mexico hosts Air Force on Saturday afternoon. The Lobos will try to continue undefeated at The Pit, as they are currently 11-0 when playing in Albuquerque.