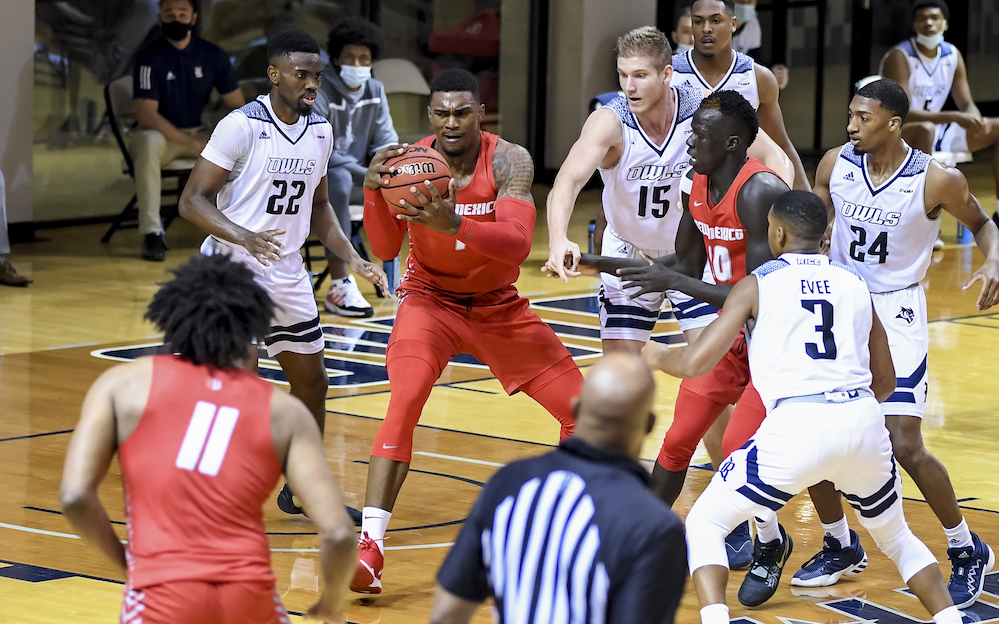 After shaking off the nerves, the University of New Mexico men’s basketball team picked up a 72-61 victory over the Rice Owls on Sunday afternoon.

This result became Rice’s first loss of the season, dropping the Owls to a 4-1 record. The Lobos opened their 2020-21 campaign with a 1-0 record. Click here for box score.

While a lot of the new players needed a couple minutes to get used to being on the court for a Division I basketball game, senior Makuach Maluach played with confidence and maturity.

“Makuach just went out and played basketball. It didn’t matter that it was our first game… No paralysis of just watching plays occur,” said head coach Paul Weir. “He was going and making things happen himself. I told the guys at halftime to just follow that lead.”

The 6’5″ guard finished the game leading all scorers with 23 points. He also completed a double double by adding 12 rebounds to his stat sheet. Weir mentioned several times during offseason that even though he has a quiet personality, the young roster would be looking up to him as an example of where hard work can take you.

Maluach with his first three of the season to put the Lobos up by 12, 50-38. Maluach leads the Lobos with 15 points. 9 mins left. #GoLobos pic.twitter.com/YFXTgaUjvY

Redshirt freshman Bayron Matos is one of the young guys who hasn’t been afraid to tell people the high expectations he has for himself. The 6’9″ center from the Dominican Republic said his goal is to average double doubles during his time as a Lobo. He didn’t achieve it for the first game, but he couldn’t hide his smile during the postgame press conference after he recorded 10 points and five rebounds.

“The first few minutes I was a little nervous because I haven’t played in close to a year, but coach was talking to me and he said ‘believe in yourself,’ ” Matos said. “I need five more rebounds and I got it, they’re going to come. They’re coming soon.”

The third player who scored in double figures was redshirt junior Rod Brown. His 11 points, seven rebounds and three assists weren’t that surprising because before the game even started Weir had already talked about how Brown stands out with his energy, effort and ability to get rebounds.

As a whole, the team shot at 43.9% from the field, better than the Owl’s 33.9% but still not ideal. Starting point guard Jeremiah Francis was one of the players who struggled. The North Carolina transfer went 2-of-8 from the field, with four missed shots being three-pointers. He played 29 minutes, the most out of any Lobo.

“Jeremiah got a little too far out on his threes, he drifted a little bit back from his defense and kind of leaned back on his threes. He has a tendency to do that a little bit,” Weir said. “I think he had some pretty good looks. I played him probably more minutes than I wanted to and I think that impacted his shooting as well.”

A total of 11 Lobos checked into the game. Walk-on Clay Patterson only registered two minutes, but Weir said he was planning on giving Patterson a couple more minutes. The coach said 11 players is going to be the blue print, explaining that Florida State, a team he thinks plays similar to how the Lobos hope to play, did it last year with nobody playing more than 28 minutes a game.

Lobo fans weren’t the only ones excited to finally see the men’s basketball team play. Former Lobo Anthony Mathis was watching, and class of 2021 commit Nestor Dyachok was cheering after the win.

Next up, New Mexico is playing the Our Lady of the Lake Saints, an NAIA team, on Tuesday Dec. 15.