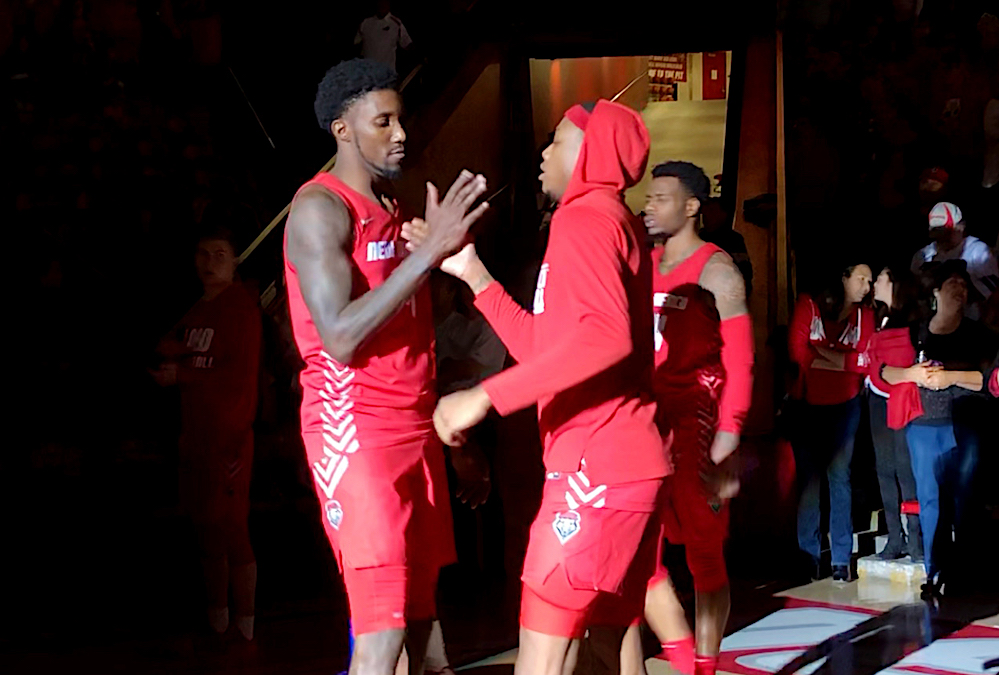 Lobos overcome rough start to get a 19-point win

The New Mexico Lobos had a tough start to their Sunday afternoon but managed to pull it together for a 107-88 victory over Houston Baptist.

With this result, the Lobos improve to 12-2 overall and remain unbeaten at The Pit. Meanwhile, the Huskies are still in search for their first win of the season, currently 0-10.

Prior to the game, the university announced that redshirt senior Carlton Bragg and redshirt junior JJ Caldwell had been suspended indefinitely. Weir would not answer any questions about it, and instead referred everything to Athletic Director Eddie Nunez.

New Mexico came into the game as a clear favorite and Zane Martin opened the game in strong fashion. He was a starter for the first time this season and gave the Lobos their first four points of the game.

But the rest of the half was not very pretty for the home team. Houston Baptist entered the break with a 48-46 lead. The Huskies were shooting at 63.3% from the field, and were allowed to make 57.1% of their three-pointers (8-for-14). Six of those came from Jalon Gates.

Saying Houston Baptist had a better half than expected is a bit of an understatement. During the first half of their last game, against SFA, the Huskies shot at 25.81% from the field. It didn’t help that the Lobo defense was not having a particularly strong game.

Lobo defense not at its sharpest. Huskies feeling comfortable from beyond the arc pic.twitter.com/OVPvjb0R5q

The Huskies added four more points to their lead less than a minute into the second half. But three minutes in, the Lobos found themselves ahead get ahead as Martin hit two free throws to grab a 55-54 lead.

New Mexico was able to reach a 22-point lead with about two minutes left in the game. This was thanks to an offense that saw five players scoring in double digits. Corey Manigault led UNM with 21 points on 9-for-10 shooting from the field, this was also his first start of the season.

Martin, JaQuan Lyle and Makuach Maluach got 19 points each, and Vance Jackson contributed with 14. As a whole, the Lobos shot at 73.3% during the second half.

“It’s me still learning how to coach him, he’s an emotional young man. Second game with him, it’s our first week of practice together. It’s new for me, it’s new for him,” the coach said.

Lobos look to bounce back from loss to Colorado with a three-game homestand
MBB: Lobos bounce back with win over Wisconsin
Brandon Mason arrested for aggravated DWI
Men's Basketball 355