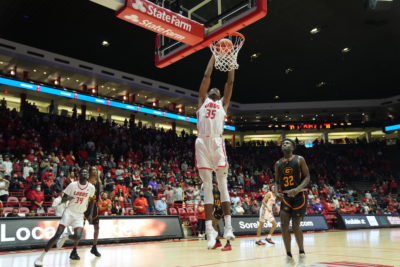 The New Mexico Lobos picked up their second win of the season on Monday with an 86-61 win over Grambling State. With this result, the cherry and silver improved to a 2-1 overall record.

The starting lineup looked a little different for the Lobos. This was freshman Sebastian Forsling’s first career start. Forsling and Birima Seck were replacing Gethro Muscadin and Jay Allen-Tovar.

Grambling State entered the game 0-2 overall with losses to GCU and Texas Tech. But the Tigers came in hungry for a win, which definitely showed at the beginning of the game. Grambling State started out stronger than the Lobos but the home team eventually picked up the pace. New Mexico went on to find a seven-point lead but with three minutes remaining in the first period, Grambling State had tied the game at 29 points.

Timeout (1H 11:22): New Mexico is picking up some momentum. Jamal Mashburn hit a three-pointer. Then House followed with a steal and a layup. Lobos lead 20-15. pic.twitter.com/RrTeFgXHSn

The Lobos pushed again and entered halftime with a 37-33 lead. This time, they didn’t take their foot off the pedal. The cherry and silver finally found a double-digit lead three minutes into the second period.

It was definitely a team effort with five Lobos scoring in double digits. Jaelen House and Jamal Mashburn Jr. led New Mexico with 18 points each. House also picked up a career-high eight steals. This was the first time a Lobo got eight steals since Danny Granger in 2003. Taryn Todd and Javonte Johnson contributed with 16 points each. Gethro Muscadin added 12 more points.

Up next, the Lobos host Montana State on Saturday at 2pm MT.