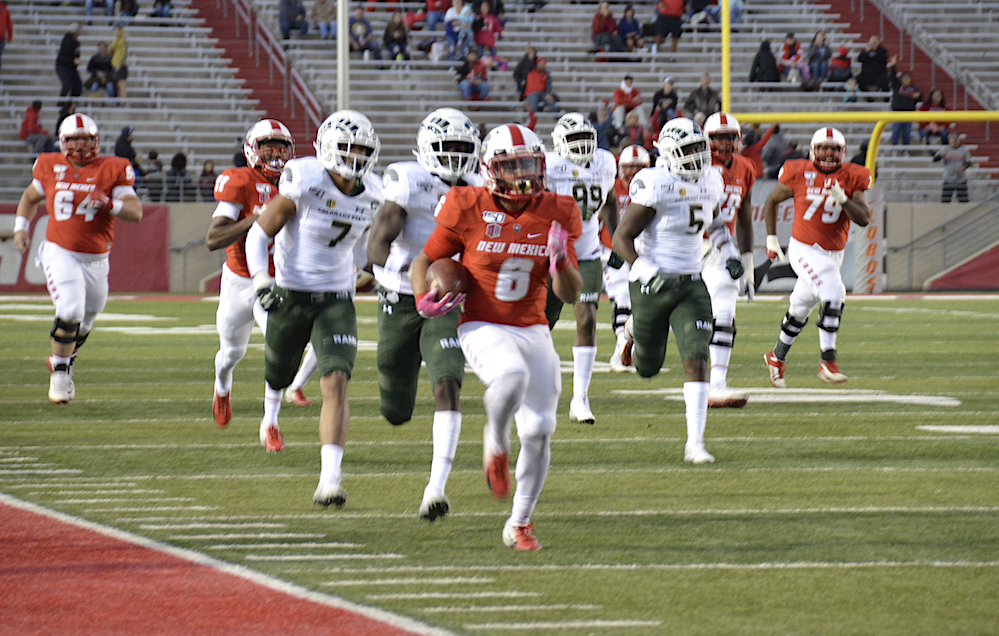 The University of New Mexico football team is still looking for its first conference win of the season, but the Lobos have a lot to figure out before that happens.
New Mexico extended its losing streak to three games and fell into a 2-4 overall record, 0-2 Mountain West, after last week’s 21-35 loss to the Colorado State Rams.
“Same story,” said head coach Bob Davie after the game.
The coach was not sugar coating it. Defensively he admitted his team struggles matching up in the secondary, players lack experience and are undersized. Offensively the Lobos lack consistency.
Inconsistency from quarterbacks keeps having the coaching staff guessing who the better option is for any given night. Sheriron Jones was the starting quarterback on Friday. Tevaka Tuioti was not injured, but he didn’t go in the game. Davie explained on Tuesday the Tuioti situation, saying the player preferred not to go in because he thought his teammate Jones could do a better job at the moment.
“I don’t want him misrepresented in that. Was it different? Yeah. I said to him, ‘would Baker Mayfield have said that?’ Mayfield might have said, ‘give me the damn ball,'” Davie said. “But your personality is what your personality is. He wasn’t upset in the least. He did it with the idea that he was being a great teammate and that it was what was best for the team at that point.”
The head coach later had a talk with Tuioti about the importance of leading from the field and not just the sidelines. During this answer in the press conference, Davie kept repeating that Tuioti was well-intentioned.
Lately, the Lobos’ game plan in the offense has definitely been on the ground. They picked up 256 rushing yards against the Rams while only registering 89 passing yards.
Saturday’s game against the Wyoming Cowboys will be interesting as that team has the rushing game nailed down. The Cowboys are ranking No. 17 in the nation at 233 yards per game. New Mexico is not that far behind, currently in the 24th spot with an average of 219.
Wyoming is 4-2 overall and 1-1 in the conference. Their last result was a 22-26 loss to the San Diego State Aztecs. While they lost, the Pokes still showed how powerful they can be. SDSU’s rushing defense is in top 5 in the nation, so the Pokes’ 157 yards on the ground against them was not a small accomplishment.

End of the first.

The Pokes lead the MW in sacks with a total of 20 this season. That stat also puts them at No. 13 in the nation. Up until the Liberty game, the Lobo offensive line had helped UNM be the only FBS school that hadn’t allowed a single sack in the 2019 season.
The fact that the Lobos use two quarterbacks is not a problem to Wyoming head coach Craig Bohl. The Pokes were one of the schools recruiting Tuioti, so they know a lot about him. On the defense, Bohl has taken plenty of notes on where New Mexico has weak spots.
“Defensively they operate with a three-down front, a lot of guys at different angles,” said Bohl. “But they have given up some big plays in the back end so we need to exploit that. They are also -10 in the turnover margin. When we play well, we get the ball and we hold on to it. So we have to do that as well.”
New Mexico’s passing defense ranks last in the MW, but Wyoming is not perfect either. The Pokes’ passing offense ranks last in the conference as they are throwing for just 115.3 yards per game. If it all comes down to rushing, the Pokes’ defense is performing a little better on paper allowing 89.5 yards per game, compared to New Mexico’s 128.2 allowed yards per game.
Notes

Eddie Nuñez gives statement on the future of Bob Davie
Lobos start season 2-0 after win against NMSU
Despite low outside expectations, Blackwell is confident on his team
Football 64