Lobos “scratched and clawed” for win over Montana State 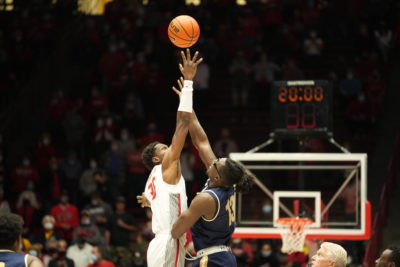 This homestand seems to be helping the Lobos.

It was not New Mexico’s best game, but the Lobos still grabbed an 81-78 victory over the Montana State Bobcats to improve to 3-1 this season. The cherry and silver is still undefeated at The Pit.

“We scratched and clawed for rebounds, we hadn’t done that yet,” said head coach Richard Pitino. “Guys individually did some things that they hadn’t done.”

For the first time this season, the Lobos out rebounded their opponent. They had a slight 33-32 advantage over Montana State. Sophomore forward Gethro Muscadin was responsible for 10 of those, as well as 18 points.

Jamal Mashburn Jr. took charge of the New Mexico offense with 21 points going 8-of-13 form the field. This was his seventh straight game scoring in double digits. He has scored 10 or more points in 14 of his last 16 games dating back to his days at Minnesota.

“We knew it was going to be a dog fight,” Mashburn said. “I think we showed coach that we can definitely handle adversity. There are obviously things we have to get better at. We’ll go back tomorrow and the next day and just get better.”

Redshirt junior guard KJ Jenkins was the third Lobo in double figures with a season-high 17 points off the bench.

New Mexico struggled to take control in the first 20 minutes, gained a little bit of control at the beginning of the second half, and then lost it again. The Lobos found an eight-point lead halfway through the second period, but with under nine minutes remaining Montana State tied the game at 60 points. The Bobcats were up by four points two minutes later.

Javonte Johnson made it into the starting lineup for the first time this season, and although he started the game in a rather quiet way, he showed up when it mattered. The sophomore grabbed an offensive rebound and tied the game at 66 points with 4:52 left on the clock. MSU called a 30 second timeout but the Lobos kept the momentum going. Gethro Muscadin registered a block, a defensive rebound and a jumper to take back the lead. The Bobcats tied it again, but the Lobos kept on fighting.

New Mexico will wrap up its three-game homestand on Monday when the Lobos host the Western New Mexico Mustangs.