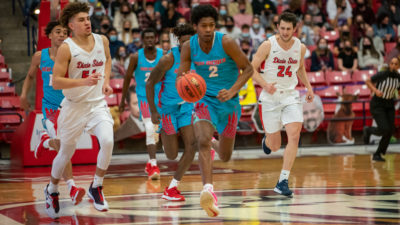 The New Mexico Lobos broke their six-game losing streak with a 72-63 victory over the Dixie State Trailblazers on Wednesday night.

This is Dixie State’s first season in Division I and in the Western Athletic Conference. The game was scheduled last minute, but it was important to help the Lobos get their confidence back before returning to Mountain West play.

“I didn’t want to sit around and mope all week about where we were at,” said New Mexico head coach Paul Weir. “I wanted these guys to know I’m all in, we are still all in. Let’s go find a basketball game and let’s keep going.”

Not only were the Lobos on a losing skid, they also had to say goodbye to one of the two seniors on the team, as Keith McGee posted earlier in the day that he was opting out of the rest of the season to focus on his mental and physical wellbeing.

Makuach Maluach, the only senior remaining, said it is sometimes difficult to talk to the younger players when things are not going well, but he still tries to help them keep an optimistic attitude.

“Just keep it up, it’s a long season,”he said. “I know it’s easy to fall into what everyone is saying. We are struggling right now, but we just have to come out… and compete every night regardless of the results.”

Three Lobos scored in double digits against the Trailblazers. Maluach, the most consistent scorer on the team, picked up 12 points while freshman guard Isaiah Marin contributed with 13. Junior guard Saquan Singleton led all scorers with a UNM career-high 17 points. He also had six rebounds, four assists and four blocks.

The shooting wasn’t too great for either team in the first half, but Dixie State had found an 8-point lead mostly because they hit a couple three-points shots. The Lobos fought through it and finished the period with a one-point lead at 27-26. UNM was shooting at 36.1% from the field while Dixie State was at 32.1%.

Neither team returned with a lot of momentum, the score stayed the same for the first two minutes of the second half. Eventually the Lobos found their rhythm and led by as many as 16 points. For a while, the New Mexico defense was holding Dixie State to under 30% shooting. The Trailblazers eventually shot better but only improved to 34.2%. The Lobo offense shot at 50% during the second period.

Dixie State is not the most challenging opponent the Lobos will face this season, but Maluach and Saquan Singleton talked to the media after the game and kept repeating that the win meant a lot to the team.

“We’ve had a couple of rough weeks. We really needed this tonight,” Maluach said.

Up next, the Lobos are driving a couple hours to Las Vegas to take on the UNLV Rebels on Jan. 16 and 18.