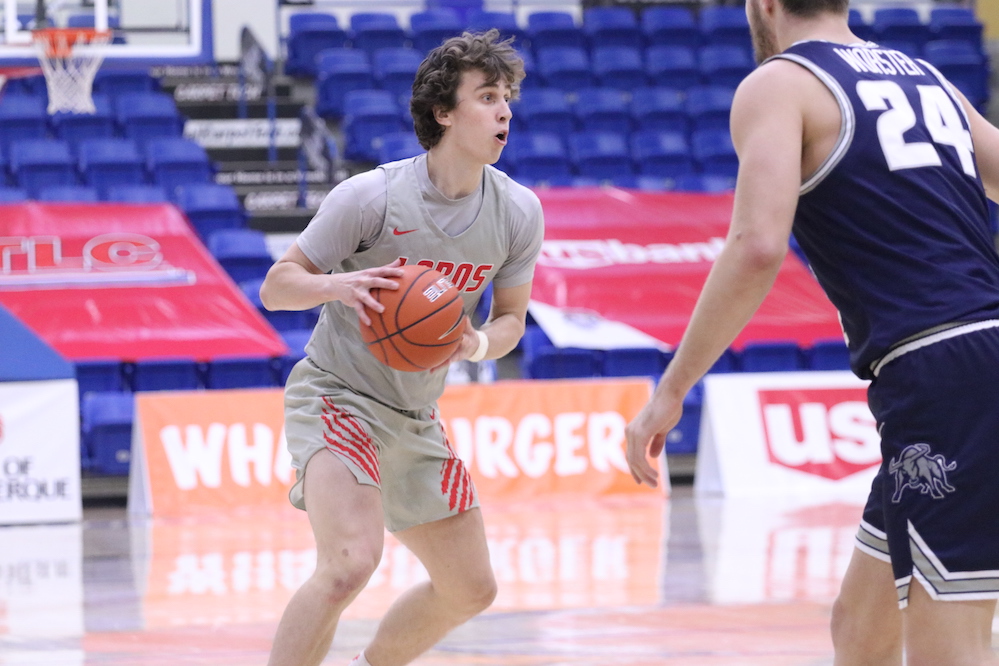 Lobos still looking for a win, freshmen getting more opportunities

The New Mexico Lobos haven’t been doing great since conference play started, but head coach Paul Weir was specially concerned with how his team came out on Friday against the Utah State Aggies.

The Lobos dropped to 3-6 overall and 0-6 in the Mountain West conference. Weir said the team has obviously not gotten good results lately, but that this time was different because the Lobos came out flat.

The Aggies (9-3, 6-0 MW) started the game with a 16-2 run. New Mexico didn’t reach double digits until a jumper by senior Makuach Maluach with just under five minutes remaining in the first period.

“It was disappointing, I told the guys that at halftime. That’s why we changed the lineup going into the second half.”

This lineup and whatever halftime speech Weir gave seemed to have given some new energy to the Lobos. Dorsey came out and hit a three-pointer to get the New Mexico offense going. He hasn’t stood out too much this season, but Weir said he if he continues to improve, he and the other freshmen will continue getting opportunities.

“It’s time to give somebody else a shot to see if they can change the results,” the coach said.

The second half efforts were not enough to get a win against Utah State. The final stats were a reminder of how much work there’s still left to do. New Mexico only shot at 31.1% from the field, and their 46 total points were less than the amount of rebounds the Aggies got (53). This season’s New Mexico team has been trying to focus on winning in the paint, but the Lobos got outscored here 38-22.

The cherry and silver has clearly struggled in conference play, which wasn’t too surprising due to being behind on practice time but also having to start with some good opponents. But Weir admitted that the opponents don’t have much to do with the Lobos’ failure to win right now.

They are facing UNLV next week, a team that took a month long break recently due to Covid-19 issues and is 1-6 overall. Weir said it doesn’t matter who the Lobos are playing next, they have little chance of winning if they don’t improve the quality of the product they are putting out there.

“We gotta find a way to play hard,” he said. “Find a way to compete, find the guys who are willing to do that…. Our product right now is nowhere near where it needs to be to compete in this conference.”