The Lobos were close yet again, but as it’s been the case in the last few games, New Mexico still fell short of its first Mountain West conference win. After a 65-60 home loss to Fresno State on Tuesday, the Lobos dropped to a 7-13 overall record and 0-7 in conference play. 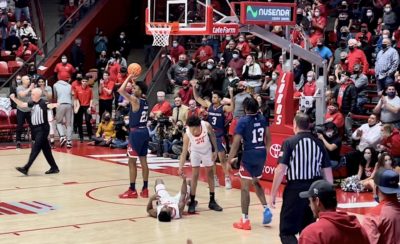 Coming into the game, it was expected that the Fresno State defense was going to be a challenge. The Bulldogs have the fifth best scoring defense in the country. However, their offense was dominant at the beginning of the game. The visiting team started out 8-0f-8 from the field.

The Bulldogs didn’t shoot at 100% for the entire game, but they did finish the first half going 15-of-25 (60%). It also didn’t help that the Lobos kept having moments when they rushed their offense, and therefore took some unnecessary bad shots.

New Mexico went into halftime with a 26-41 deficit. Fresno State started the second half shooting 2-of-9 but it still took a little longer for the Lobos to get within single digits.

Cutting down the deficit 👀 pic.twitter.com/d7hMorrHlU

New Mexico gained some momentum and it was a 49-51 game with 6:23 remaining. The crowd at The Pit stood on their feet and got loud, but then Fresno State got on the free throw line and added two more points. The Lobos failed to score on their next possession, and Fresno State scored again with a wide open three-pointer by Donovan Yap. Pitino called a 30-second timeout with five minutes left as the Lobos trailed 49-56.

Fresno State kept trying to pull away but New Mexico didn’t allow it. With 45 seconds remaining, Jaelen House made it a three-point game.

New Mexico head coach Richard Pitino described his team’s first half defense as “really, really poor.” He said the Lobos did a better job in the second half, but that the effort felt short.

“I am disappointed,” he said. “I thought we were moving in the right direction after the last two games, even though we lost to Colorado State and Wyoming, but we took a little bit of a step back in the first half. We were better in the second half, but it wasn’t good enough.”

Next up, New Mexico will host the San Jose State Spartans on Friday at 7pm MT.