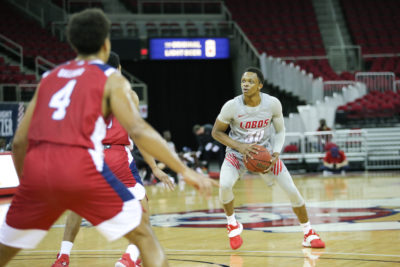 The Fresno State Bulldogs take on the New Mexico Lobos at the Save Mart Center in Fresno, California on January 30, 2021. (Samuel Marshall Photography)

Thursday’s game against Fresno State had a poor first half for both teams as they were tied with 19 points a piece. The Bulldogs shot at 18.5% and the Lobos at 29.0% during that first period. That same game ended up being more entertaining than it sounds. The game went into overtime and Fresno State pulled the victory in the last few seconds.

It was a painful loss for the Lobos, but Saturday did not go much better. The first half saw more scoring but once again ended in a tie (28-28).  The game was close for the most part, but the Lobos were really struggling making shots. That second period saw 38 attempts but only 11 successful shots for New Mexico.

Free throws also made a difference. Fresno State got on the free throw line 24 times through the entire game and got 18 points from there. The Bulldogs are not usually a good free throw shooting team but they made almost 90% of their shots during the second half. Meanwhile, the Lobos only got to the charity stripe nine times and made four points.

UNM has had a rough season, but the team has decided to finish the season regardless of the challenges.

“I think we just have to stick together no matter what,” said sophomore Kurt Wegscheider. “We gotta finish the season. I know we lost that game, but I know we are going to win some games.”

It’s been a difficult journey so far, but New Mexico head coach Paul Weir and sophomore Kurt Wegscheider talked about finishing the season no matter what. pic.twitter.com/UsPeKY0vRQ