Lobos win against the NMSU Aggies in Las Cruces 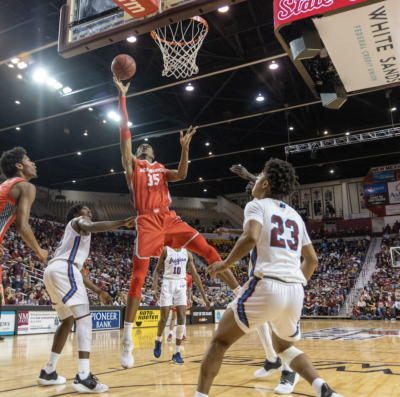 The New Mexico Lobos took a 101-94 victory against the NMSU Aggies in Las Cruces for the first game of the Rio Grande Rivalry this season.

Lots of booing started immediately as the Lobos stepped into the Pan American Center court. Jaelen House loved every second of it. The New Mexico guard made a “bring it on” arm motion when he heard the New Mexico State fans. House had picked up 31 points by the end of the night.

Tuesday night didn’t start out in the brightest way. The lights went out during the first media timeout, and although the court light was back on almost immediately, this was actually part of a power outage that delayed the game for 45 minutes.

Oh and the lights went out 😅 pic.twitter.com/WbKGNshiMm

Once the game resumed, New Mexico looked more comfortable right away and took a 25-18 advantage with nine minutes left in the first half. However, the Aggies fought back and with 7:11 left on the clock, NMSU guard Levar Williams hit a three-pointer that gave the home team a 26-25 advantage. The game stayed close, but New Mexico found a 49-42 lead at halftime.

The Lobos controlled the pace, forcing the Aggies to play faster than they typically do. Even so, the game was close for most of the night. NMSU is a stronger and more physical team, but the Lobos stepped it up in the rebounding area, which is typically a weak spot for them.

UNM outrebounded the Aggies 39-35, with Jay Allen-Tovar being the biggest contributor with 11 of them. This was a career high stat for the Lobo forward, who also finished the game with 15 points to complete a double double.

Both teams shot around 47% from the field. NMSU’s Teddy Allen and Jabari Rice combined for 52 points by the end of the game. Will McNair Jr. was the third Aggie in double digits with 14 points on 6-of-10 shooting.

Meanwhile, the Lobos had four players in double figures. Jamal Mashburn Jr. and Javonte Johnson added 19 and 12 points respectively. This was the first time New Mexico reached 100 points this season. It was also the first time the Aggies gave up 100 or more points for the first time since Feb. 18, 2017.

New Mexico guard Jaelen House finished the night with 31pts. He was having fun and feeding off the crowd, here is a quick interview about that. pic.twitter.com/5fmVixSCFH

Part 2 of the Rio Grande Rivalry game will be in Albuquerque on Dec. 6.