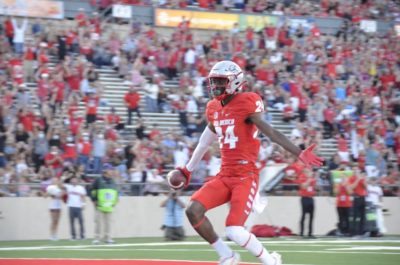 Danny Gonzales stopped his players in the middle of them singing the New Mexico fight song because it sounded too “somber.”

They were in the locker room after a 27-17 victory over Houston Baptist. It was their first home in 642 days and the third straight win dating back to last season. The Lobos didn’t quite dominate like they were hoping to, but the coaching staff wanted to see more energy in the locker room.

“We stopped them and taught them how to do it right, because winning is not easy,” Gonzales explained his reason for interrupting the singing. “And obviously winning around here has not been easy. Changing that is changing everything. The attitude from the beginning to the end.”

New Mexico took control early in the game, but eventually the Lobos realized it wasn’t going to be an easy victory.

The cherry and silver took a 7-0 lead after Kyle Jarvis caught an 11 yd pass from Terry Wilson, followed by a successful kick by Andrew Shelley. The clock read 12:50, and the Lobos scored again less than five minutes later.

Freshman Luke Wysong caught a 22 yd pass to put the Lobos in the red zone. Although he was only a few yards away from scoring, he made it easier for Trace Bruckler to catch a 4 yd pass that give the Lobos a double-digit lead.

The New Mexico defense kept HBU from scoring during the first quarter, but eventually the Huskies fought back.

HBU cut the deficit to 7-14 after a touchdown two minutes into the second period. The Huskies picked up another three points from a field goal with four and a half minutes left in that quarter.

Their defense wasn’t their strong point last season, but they caused a decent amount of problems for the Lobos. New Mexico didn’t score in the second quarter until the clock read 2:40. Freshman Keyonta Lanier caught his first touchdown as a Lobo from a wide open 47 yd pass from Wilson.

That was the last New Mexico touchdown of the night.

Shelley gave the Lobos their last six points with a 30 yd field goal with 6:22 remaining in the third quarter, and a 37 yd field goal with 1:38 left in the fourth. The last touchdown of the game came from HBU with four minutes left on the clock.

Although the game started off well for the Lobos, they couldn’t quite keep the same momentum going. Gonzales said this was a good learning experience about what it means to have a winning mentality.

“We can’t relax. When we have an opportunity to step on somebody’s throat, we need to do it,” the coach said. “Our community expects the Lobos to lose when we play somebody. We need to change that.”

Up next, the Lobos will host the New Mexico State Aggies for the Rio Grande Rivalry game on Saturday Sept. 11 at 5pm MT.