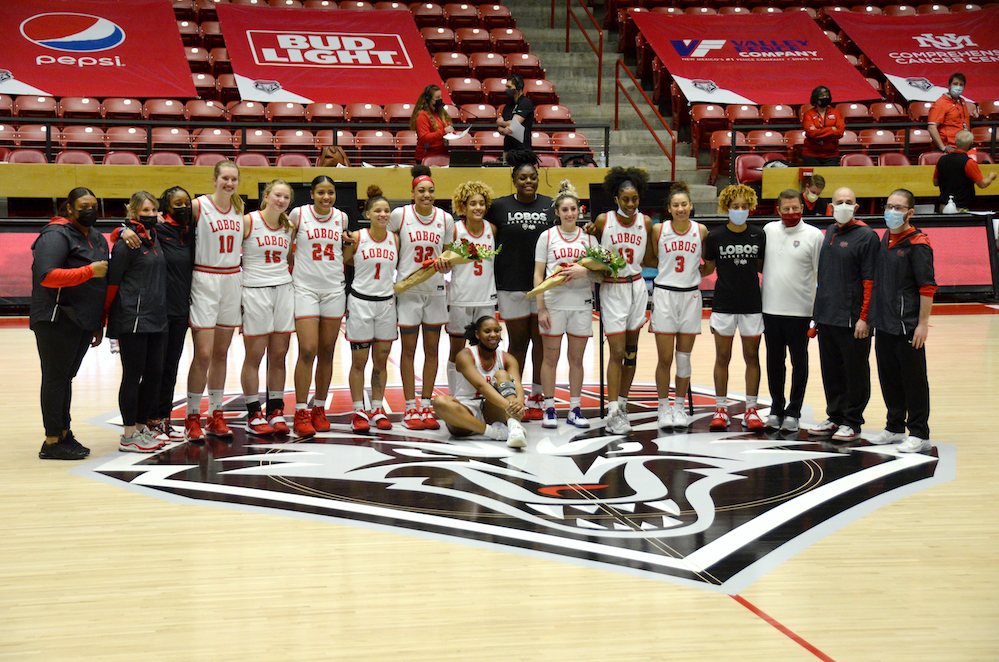 The Lobos finished the 2020-21 regular season with a gauntlet of six games in eleven days.  They started that stretch in second place behind Colorado State.  Friday night they defeated CSU for the second time in two nights, 71-62 in a game that was closer than the final score indicates.  That two game sweep, along with winning three of the other four games leading up to it, game UNM their first unshared Mountain West regular season title ever.

It was anything but easy as CSU trailed by fourteen, 48-34, and then went on a 26-12 run to the game was tied at 60 with five minutes to go.  But as with Thursday’s game the Lobo defense got tighter in the end and they held the Rams to 1 of 10 the rest of the way.  Ahlise Hurst led the Lobos with 21 points on 5 for 10 shooting from three point range, and Shai McGruder had 15 rebounds to help UNM to a nine rebound advantage for the night.

But if you are reading this, you almost certainly know most that.  You have seen the unrestrained joy of the celebration on the Pit floor after the final buzzer.  Four year senior Antonia Anderson and Jayden De la Cerda smiling and posing and soaking in what has been a long journey with lots of basketball and non-basketball hurdles put in their way.

I was fortunate enough to be there for Friday’s game, one of a half dozen or so media people covering the game.  I was glad to feel the emotion of both teams, see both coaches stalk the sidelines trying to get every tactical edge in play calls and working the refs.  But I also felt a little ashamed to be there—there were no parents, no friends, and no eight to ten or more thousand screaming adoptive family in the stands.  After what the team has been through, how the team has played team ball with effort and a smile all season, and after thousands of season ticket holders going through Pit withdrawal the arena should have been full of a fans.  But it was not to be.  I got to be a little closer to it, and wish I was not alone in a vast array of empty seats.  This group of players deserved better.

But we have 48 hours for the team to rest and get ready to play either San Diego State or Air Force on Monday.  Neither will be an easy opponent, but both are teams the Lobos have shown they can beat.  I do not know if UNM will win, or if they do how far they will go in the tournament.  But I know I will enjoy watching them, and I know they will play the same kind of basketball they have played since defeating Midwestern State in early December.

So I asked myself, how would I describe just what that is—how would I describe how this team plays?  This is Mike Bradbury’s fifth season.  The first season he had a team of players he inherited—players recruited to play a certain style and pace that was not what Mike imported from Wright State.  Since then, no matter who has been on the roster, this team has run.  Every pre-season press conference some reporter asks, “What’s going to be different this year?”, and the answer has always been “We are going to play faster”.  The eyeball test says they probably don’t play any faster this year than previous season.  There is no Cherise or Aisia running the point and pushing the tempo and no one on this roster is as fast as either of those two were except Shai—and while Shai can do many good things, being a point guard is not her forte. 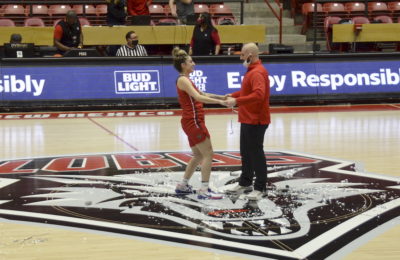 What I came up with is this:  what they likely do faster this season is get a good shot, take it, and make it.  I believe it is because they have more shooters the team trusts, and do a more consistent job getting the ball to those shooters.

Each season I will do a little sample of how long it takes on the 30 second clock for the Lobos to get a shot off.  This is not an exhaustive study of a season’s worth of data, nor a scientifically valid one, but 30 or so possessions in the first quarter of a handful of games.  This season the average time to get off a shot for the ones I charted was a 11+ seconds.  With Cherise at the point in 2017-18 the average was a little over 13, and in 2018-19 & 2019-20 with Aisia it was a little over 12 seconds.

I was surprised when I then looked at the average number of shots per game for the Lobos.  I would have thought quicker shots would mean more shots per game, but it did not work that way.  In Mike’s last four seasons this team is actually only third is shots per game at 66.0, ranking behind both the 2017-18 team (67.7) and last season (69.7).  I speculate that this season we have been ahead in the 4th quarter of most games, and have slowed the pace to use some clock more than in past seasons, so the game-wide time to shoot may be lower this season even though my first quarter samples showed them to be quicker.

However, even though taking fewer shots, the Lobos this season are putting up the most points.  After Friday they are averaging 82.4 points per game, the best in Mike’s tenure and 7th in the country for NCAA division 1.  The difference is two things:  better shooting percentage.  It’s not provable, but the numbers and eyes strongly indicate it’s because of better shots.

Here are a couple comparisons over the seasons:

–There are more players on the team getting shots in the right positions for them to score, and they are taking advantage of it.

Both Latascya (28th) and Ahlise (40th) are ranked in most 3 pt FGs per game.  Interestingly former Lobo Quincy Noble is also in the rankings at 30th.

Monday the next “season” starts.  This team has lived by their shooting, and when that has struggled, so have they.  CSU found and executed a good defensive game plan and held down the shooting and scoring these past two games, but the Lobos may well have played their two best defensive games as well.  I make no predictions about Monday’s game, other than I am anxiously looking forward to it.