Lobos Win Ugly 68-55 Over CSU, Move Back Into 1st With One Game Left 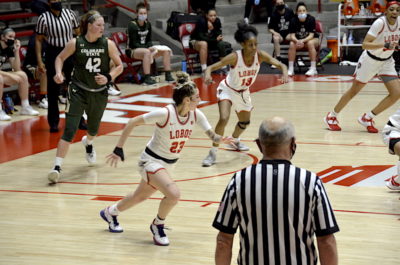 With Thursday’s win over Colorado State, the Lobos can compete for a conference title on Friday. Isabel Gonzalez/The Lair

It was senior night without family or friends.  It was a make-up game squeezed in before the MW tournament next week.  But it was also #1 Colorado State vs #2 UNM.  There were no fans, but the two teams brought their own intensity to the first of a two game series to decide which one wins the Mountain West regular season, and possibly put themselves in position for an NCAA at-large bid.

As they have all season the Lobos won with team basketball.  Only scoring 68 points they still had five players in double figures led by junior Shai McGruder’s 16 (6 of 10 from the field, 3 of 3 from the free throw line).  They had 15 assists on 24 baskets as they had to work harder against a Ram defense that was focused on defense more than on scoring themselves.

The Lobos struggled offensively, winding up fifteen points below their season average of 83 ppg.  They shot a sub par 38%.  But they also played what was arguably their best defensive game, holding CSU to 25 points below their average, and 30% shooting.  Both offenses missed some open shots, but the defenses deserve much of the credit for the choppy, low scoring game.  The refs let a lot of physical play go, and that too kept either team from getting into a fast paced game. 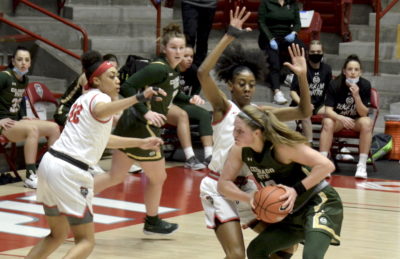 Junior Shaiquel McGruder led the Lobos with 16 points shooting at 60% from the field. Isabel Gonzalez/The Lair.

The stats on the game do not tell the full story.  They show that CSU never led after UNM went up 3-0 on AT’s three point basket, and then opened up a 18-5 lead near the end of the first quarter—but that belies that CSU stayed close throughout, cutting the lead to 44-42 with under two minutes left in the third quarter.

It was only in the forth quarter when the Lobos changed their offensive sets to get better shots for their outside shooter, and CSU went cold missing eleven shots in a row that UNM’s lead finally grew to a more comfortable size.

Although the Rams were larger—and seemingly stronger—in the post, the Lobo were able to offset that with quicker posts.  Shai grabbed 9 rebounds along with her 16 points, and AT had 10 points and 11 rebounds as the Lobos outrebounded CSU 46-44.  Part of that was because for most the game CSU did not go hard to the offensive glass to contest rebounds, but was intent on racing back to prevent UNM from getting into a transition offensive game.  It seemed a little strange that when the Rams made their third quarter run it was sparked by some offensive rebounds that got them extra shots, but then in the forth quarter they went back to the more defensive posture.

As of this morning, the Lobos are in first place, percentage points ahead of CSU.  It is an ephemeral lead because the winner of tonight’s game will finish in 1st, and get the number one seed in next week’s tournament.  But even if it turns out to be only for a day, senior night in 1st place had to feel a little better after this very weird season.  Maybe it wasn’t so ugly after all. 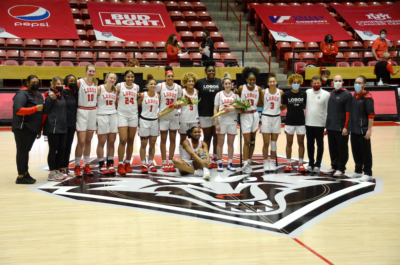