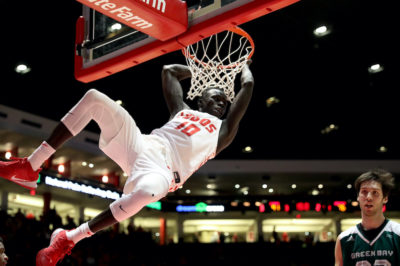 Makuach Maluach is the only senior in the New Mexico men’s basketball roster. His job as a leader has not been an easy one this season.

“It’s a long season. I know it’s easy to fall into what everyone is saying. We are struggling right now, but we just have to come out… and compete every night regardless of the results,” Maluach said on Jan. 13 after a victory against Dixie State.

That win snapped a six-game losing streak, but it was just a small break in the Lobos’ struggling times. They got swept in a two-game series less than a week later. The young Lobo roster was heading into the locker room with their heads down after falling twice to the UNLV Rebels.

Maluach held his head high and went around giving his teammates high fives. He then headed to the bench area to talk to assistant coach Ralph Davis while everyone else had already left the court.

“It’s up to me to hold my head when we lose or things are not going well… Ralph just told me to keep coming in everyday and work. Show up to work for the younger guys,” Maluach said.

After the game, Makuach Maluach, the only senior, saw his teammates with their heads down and started giving them high fives. When they all went to the locker room he stayed out a little longer to talk to a coach. pic.twitter.com/nwAGRd3te0

Maluach and his team bounced back to pick up their first conference win with a 67-51 result over the San Jose State Spartans. The senior led all scorers with 25 points on 10-of-14 shooting. This was one of the best offensive performances of his career, only one point shy of his career-high.

It was a much needed victory, but the Lobos’ journey didn’t get easier over night. New Mexico lost 83-71 to SJSU during the second game of the series. The Lobos have been blown out more than once this season, but a loss to the Spartans hurts a little more than a loss to a better team.

The state of New Mexico is now allowing the Lobos to return to Albuquerque to practice, although they are still not allowed to host games at The Pit yet. This is not the college basketball experience any of the players signed up for, but Weir said he felt especially sorry for the seniors because of the experiences they’re missing out on during their last year as college players.

Still, the head coach said Maluach has tried to be the best leader possible. Even before the season started, Weir said the senior would lead by example. The Australian native is the team’s most consistent scorer (and the only one averaging double digits) with an average of 13.50 points per game. He hasn’t shot well in every game, but when shots don’t go in he always answers questions about it by saying he’s not worried because he knows he can do better. He also leads in rebounds with 5.71 per game.

Through his time in New Mexico Maluach has been known for his quiet personality, but this doesn’t mean he is soft. His teammates respect him just as much as his coaches do.

“His maturity and willingness to work through that, it says a lot about his character…For it to go the way that it has for him, and for him to act that way, you can’t really say anything more about somebody’s character,” Weir said. “I think we are all grateful just to have him here as our lone senior. He’s our guy. He’s helping grow these young guys, even in the face of some very difficult times.”

Here are some other stories about Makuach Maluach as a Lobo: