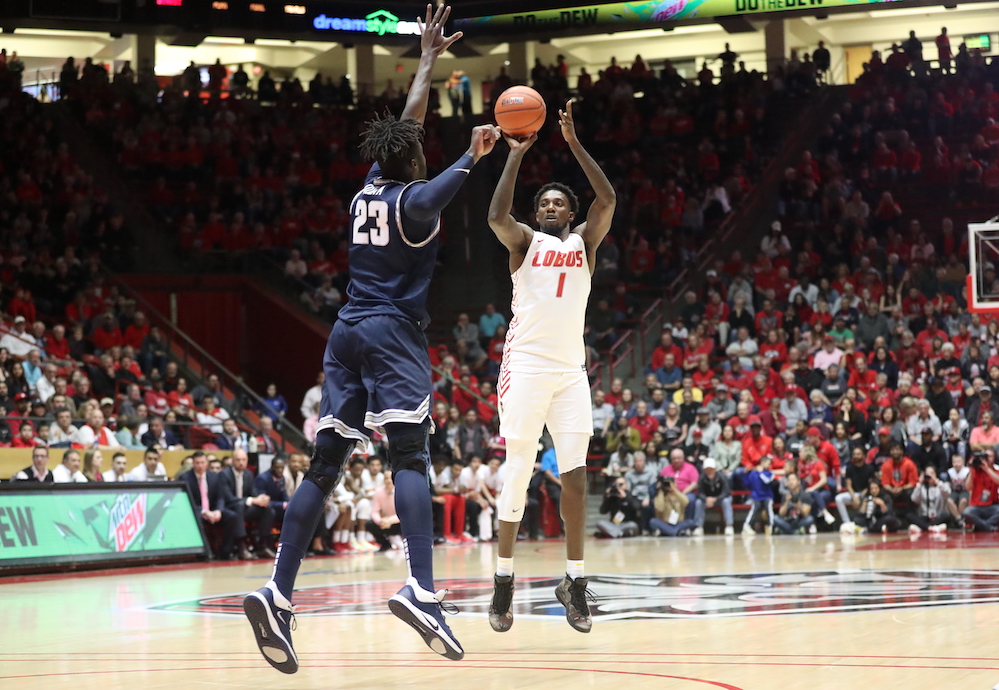 Jon Rothstein sent his signature tweet of “This is March” at 12am ET while it was still Saturday night in Albuquerque. As if scripted, 10pm MT was when New Mexico senior Corey Manigault stole the ball from Utah State and got the layup that helped New Mexico upset the Aggies.

New Mexico snapped a five-game losing streak with their 66-64 victory against the No. 2 team in the conference. It was Senior Night at The Pit and the mood after the game was represented perfectly when redshirt senior JaQuan Lyle walked into the media room singing. 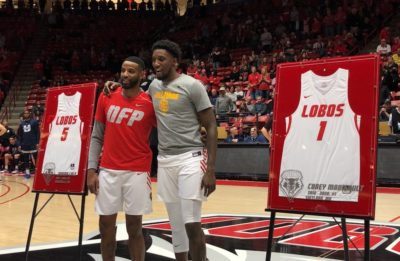 JaQuan Lyle and Corey Manigault got recognized before the game for Senior Night. Each brought their mom to escort them.

The season has been rough for New Mexico in a couple different ways, but head coach Paul Weir is thinking about what’s next.

“A brand new season starts Wednesday. I think a lot of different things can happen,” he said. “Teams can hit reset, teams that aren’t in a good place can spin it around. That’s the beauty of March.”

The Lobos had a decent start but the most they could get ahead was five points. Their opponents kept the game close, as shown by the small one-point lead for New Mexico at the break. Utah State controlled a lot of the second period and got as big as a 14-point advantage.

The home team worked hard to catch up and tied the game with three and a half minutes left at 57-57. Both teams kept trading the lead, but once Manigault got a dunk and one with 44 seconds left, New Mexico wouldn’t fall behind again.

With 24 seconds remaining, the senior stole the ball and got a layup that got The Pit crowd to explode in cheers. Utah State’s Diogo Brito attempted a three-pointer with two seconds on the clock but missed. The last point the Aggies got came from a free throw.

Manigault finished the night with a total of 16 points, including the last five for the Lobos.

The final stat sheet shows Lyle playing 40 minutes. He did not have a good shooting night, going 3-for-13 from the field. But what put him in a singing mood was that he was able to contribute with a game-high 10 assists.

“Whether it’s shoot or pass, whatever it may be, just trying to make the right play,” he said.

The Aggies had Neemias Queta and Sam Merrill score 18 points a piece. The other Aggies scored six points or less.

Utah State finished the regular season with a 23-8 overall record and 12-6 in the conference. They earned the No. 2 seed for next week’s Mountain West Tournament in Las Vegas.

New Mexico closed with an 18-13 overall record, 7-11 MW. The Lobos are the No. 7 seed and will play the San Jose State Spartans on Wednesday, the first day of the tournament.