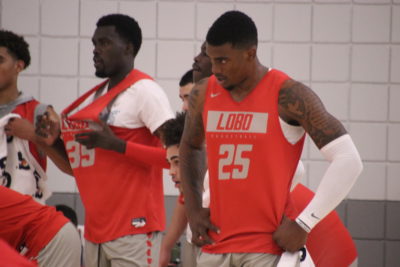 While coming up with a non-conference schedule seems like an almost impossible task, the New Mexico men’s basketball team is still preparing for the 2020-21 season to start late November. The outside expectations are lower than in previous years, but head coach Paul Weir thinks this roster will be able to put up a fight.

Overall team
It’s a young team and they have some work to do. Weir is well aware of that, but he also mentioned a lot of strengths. He said this roster is probably the most athletic he’s had at UNM. The team is planning on playing fast next season, Weir described their speed as “terrific.”

The staff also likes the depth, “particularly up front, probably the deepest frontcourt we’ve had.” Weir feels good about the point guard position with four different options. For now, the coach is avoiding making a decision on the starting five, saying he wants his players to not settle on a role yet and continue to compete against each other.

New offense
Scott Padgett has only been with the Lobos for a couple of months but has already made an impact.

“Offensively we are going to be a little different in some ways from some things we’ve done in the past,” Weir said. “I like that, I like the ideas that he’s brought and the scheme we’re putting forward.”

Another exciting thing about the offense, according to senior Keith McGee, is that the Lobos have been working on three-pointers and there will likely be a lot of those.

Injuries
The two injury question marks the team had this offseason were Jeremiah Francis and Valdir Manuel. Weir said both have exceeded the staff’s expectations. Neither of them have missed workouts or practices. Both are expected to play this upcoming season, but it is not clear yet how much time they will get on the court.

Bayron Matos
It’s no secret that the redshirt freshman has a good relationship with Padgett. Weir has talked about this a few times and is excited to see how they will benefit from each other, and how it will benefit the group as a whole.

Weir on Matos: “He’s got an engaging personality. He’s hard to not love and smile because he is just such a passionate young man.”

He sat out last season and is still a freshman on paper, but he is expected to get a lot of minutes in the center position.

Rebounding
Weir admitted that rebounding hasn’t been a strong point during his time with the Lobos, Carlton Bragg being the exception. The coach is working to improve that and will be counting on his “proven rebounders”: Matos, Rod Brown, Saquan Singleton and maybe Manuel if he gets fully healthy.

Seniors
The two seniors couldn’t be more opposite from each other when it comes to personality. Makuach Maluach is quiet and leads by example. When the coach talked to the media late August, he said Maluach was leading the team in every category.

Paul Weir said Makuach Maluach has been “incredible” and “by far our best guy in workouts.”

He has a quiet personality but Weir said he leads by example just like other guys he’s coached including RJ Barrett (NY Kincks) and Pascal Siakam (Toronto Raptors).

McGee is an athletic player full of energy. He is way more vocal than Maluach, but sometimes his energy becomes too much and needs to be toned down. Weir’s relationship with McGee has had its ups and downs, but the coach believes he can have a big impact when it comes to leading the younger guys.

“We’re going to need it from Keith McGee without a shadow of a doubt,” he said. “His shooting ability, his experience, he is going to have to make a jump on the court and off the court. That’s not all on Keith, that’s on me as well.”

McGee said he has worked on different shots, but he is also focusing on playing with a better pace by calming down and making better decisions. While he is still wrapping his head around his new role, he is glad to be sharing it with Maluach.

“It’s still a shock, like, wow we are seniors. I’m just this energy guy and now I have to be all serious. It’s a huge transition, of course. We definitely talk about it all the time,” McGee said. “I’m thankful to have him because he’s been here, he really knows. He has been helping me out.”

Scheduling
Not official yet, but the plan is still to play New Mexico State twice and continue to UTEP series.

Weir was hoping the NCAA eliminated the MTE requirement. That didn’t happen, so the staff had to go back to the drawing board.

Aki Collins
The program hired Aki Collins as director of operations, a position that was left open after Ralph Davis was promoted to assistant coach in September.

Collins spent the last five years as an amateur evaluation scout for the Oklahoma City Thunder. Prior to that NBA experience, he was an assistant coach at the University of Memphis from 2012-15, and assistant coach at Marquette from 2008-12.