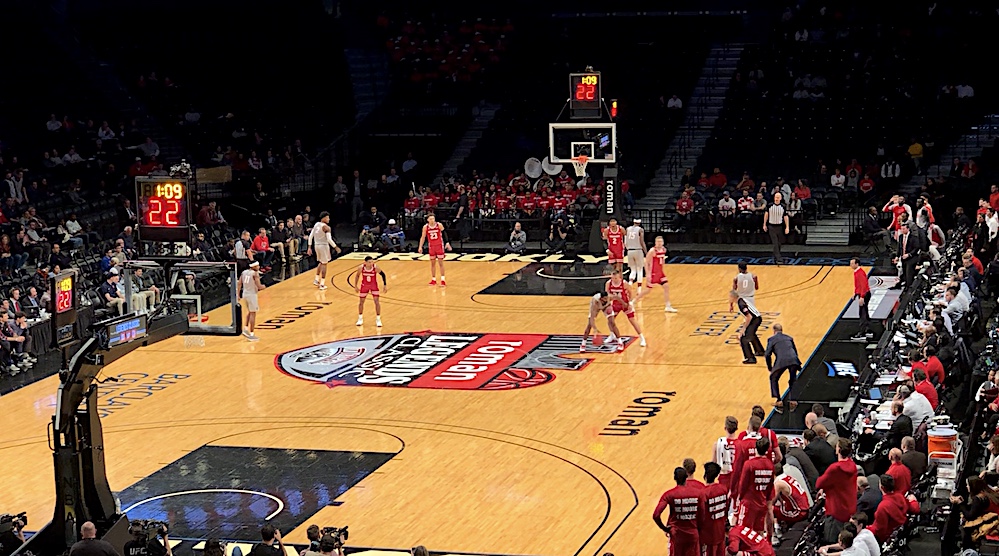 MBB: Lobos bounce back with win over Wisconsin

The University of New Mexico Lobos finished their 2019 Roman Legends Classic trip in New York with a 59-50 victory against the Wisconsin Badgers at Barclay Center.

“Gotta be better no matter the circumstance..chance bounce back tomorrow,” tweeted JaQuan Lyle on Monday night.

The team did bounce back and performed better, a lot of it being the result of Wisconsin’s slow type of play.

New Mexico had 24 total turnovers against Auburn but only 13 against Wisconsin. JJ Caldwell said this was beneficial for both sides of the ball.

“The way they play, they do make you slow down and I think that helped us out a little bit,” he said. “It let us slow everybody down defense and offense. We were controlling offense, we were trying to make plays with each other. That’s a big step for us going forward.”

Zane Martin said his team is at about 30% of what he thinks the Lobos can accomplish pic.twitter.com/XF5a2WrX8q

By halftime the Lobos held a nine-point lead at 29-20. They had the Badgers shooting at 38.9% from the field while they themselves were at  44.4%. This was a big improvement for the 31% the Lobos shot during the first half of their Monday game.

New Mexico found a double-digit lead a couple of times, but the game wasn’t completely decided until a few minutes before the game was over. Wisconsin was able to get within three points with 10 minutes left in the game.

Wisconsin head coach Greg Gard said he thought his team performed better in the second period. He was content with the defense but admitted the offense needed to find consistency.

“I thought defensively, in both (Roman Legends Classic) games, we were good enough… but you have to be able to score, obviously. Not that we have to make an abundant number of threes but we have to balance this out,” Gard said.

An interesting statistic to look at is that New Mexico allowed Wisconsin to shoot 26 shots from beyond the arc while the Lobos only attempted 13 themselves. Head coach Paul Weir said that since the three-point line was moved back, the game plan has been to focus on getting inside while forcing opponents to shoot more threes.

Weir admitted that the plan might need to change later in the season, however, this strategy worked out against the Badgers as they only successfully accomplished two attempts to put them at 7.7% from beyond the arc.

As a whole the Lobo offense shot at 44% form the field, the Badgers were at 34%.

Four Lobos scored in double digits with JaQuan Lyle leading everyone with 14 points. He went 5-for-14 from the field but his 14 points were a good accomplishment after Monday’s performance and considering the fact that he was still sick. Zane Martin, Carlton Bragg and Makuach Maluach registered 12 points each.

Up next the Lobos return to Albuquerque for a two-game stretch hosting Montana on Dec. 1 and Boise State on Dec. 4.

Hugh Greenwood's message to the Lobos
MW teams are out the NCAA Tournament
Lobos can’t hold on to 17-point lead, fall to Fresno State
Men's Basketball 296

Isabel Gonzalez: Richard Pitino and the Lobos get ready to begin workouts

Isabel Gonzalez June 17, 2021
Isabel Gonzalez @cisabelg The New Mexico men's basketball team has had about a week and a half together. It's still too early to say much abou [...]
Men's Basketball

Isabel Gonzalez May 20, 2021
Isabel Gonzalez @cisabelg Makuach Maluach has taken the next step to continue chasing his dream of a professional basketball career. The 6'5 guard [...]